If there has been a filmmaker who has grabbed eyeballs, transcended genres, created a new cinematic language, desecrated icons, and still looks good to shake things up in the future, one doesn’t have to go beyond RGV. The man has managed to prove time and again that there is a method to his madness, and that madness is in his soul. Sure, he has wandered quite a bit from his glory days, but every now and again, he reminds us that he is still around, and he’s still got it in him. Killing Veerappan is a timely reminder of the fact that the RGV brand is still quite potent. And what a start to 2016. The momentum has been set, and it is up to the rest of the releases this year to set the box office on fire. 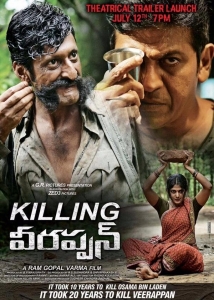 Killing Veerappan starts off with the titular character (Sandeep Bhardwaj) avenging the death of his close associate and confidante, Gurunatha, by mowing down a posse of STF personnel led by SP Harikrishna (Rockline Venkatesh) and SI Shakeel Ahmed. The incident that comes soon after the beheading of Forest Officer Srinivas (Gadda Viji), proves to be the straw that breaks the camel’s back, and the establishment puts one of their best men (Shiva Rajkumar) on the chase. He, along with his loyal deputy (Sanchari Vijay) and a spirited informer, later trainee officer, Shriya (Parul Yadav) soon get caught up in a deadly game of cat and mouse with the extremely violent, yet brilliant, Veerappan, and also end up dragging in, a bunch of loyal undercover cops, an underworld don, a former cop turned timber trader who is dragged back into the case, and Veerappan’s wife, Muthulakshmi (Yagna Shetty) that ultimately leads to a bloody culmination.

From the very first scene, it’s quite clear that RGV is in complete control of the story that unfolds, and it is evident in the highly taut screenplay that has barely a couple of dull moments, and even those are fleeting. There are the obvious comparisons with the Veerappan biopic, Attahasa, directed by AMR Ramesh that came out a couple of years back, but while that focused on Veerappan’s backstory, this one focuses purely on his pursuit. Yes, the usual RGV trademarks such as the off-kilter camera angles, the sudden blaring of the background score obscuring the dialogues, and the facial closeups of the characters, are present here and in abundance, but for a change, they add the extra zing to the movie, instead of seeming jarring. Technically the movie is razor sharp, and the audience can feel it in the highly atmospheric nature of the scenes. The pick of the lot being an ambush on the cops by the bandits in a highly charged pre-interval sequence, where you can almost smell the fear, adrenaline and gunpowder in the air, and a brilliantly staged shootout sequence, shot with drones, that will have you at the edge of your seat. The soundtrack of the movie is loud, jarring and yet, it gels perfectly with the rest of the movie. 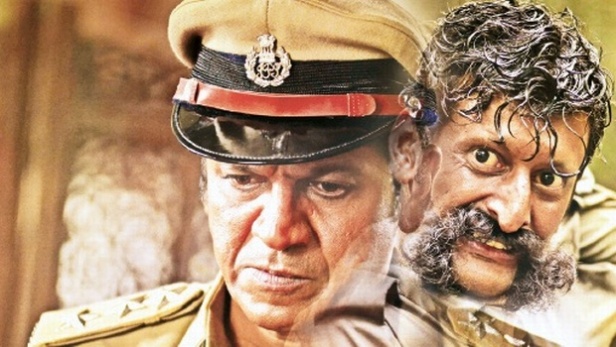 Shiva Rajkumar is in fine form here, playing a character that seems to be the composite of 2 real life personalities, DCP Vijayakumar and SP Senthamarai Kannan, the 2 men who brought Veerappan down. He lets his eyes do the talking in most scenes, and that just takes up the intensity in most scenes up to 11, and in the rest of the movie, his dry wit, and calm demeanour make sure that this is one of his most memorable characters and a career defining role. But the real star of the movie is debutant Sandeep Bhardwaj as the titular Veerappan, who lives and breathes the character with a physicality so ferocious, it needs to be seen. He fills up the screen in every scene he’s in, and except for a slightly jarring accent, he doesn’t get a note wrong, and is probably a shoo-in for quite a few awards this year. Parul Yadav as the spunky Shriya puts in a crackling performance and has definitely managed to make an impression with the audiences, as has National Award Winner, Sanchari Vijay. The only bit of miscasting here is Yagna Shetty as Muthulakshmi, who is a fine actress, no doubt, but somehow looks too gentle and innocent. But even she manages to make an impact in her final scene in the movie.

This one needs to be watched, although there is a concern if the dubbed versions in Tamil, Telugu and Hindi, will have the same impact as the Kannada version. That being said, it is a good start to 2016. RGV fans will have reason for cheer, after a very long time, as will Kannada movie audiences. Do not miss this one.