In one of her only scenes of consequence in Sam Medes’ Spectre, Monica Bellucci takes a slow walk towards a pool in her home straight from her husband’s funeral. The oomph sizzle and arresting presence she conjures up in this one scene is the only strong redeeming part of an otherwise lacklustre and dead-slow Bond film. For the first time, Bond does nothing more than throw money, action and car chases all over the place.

Craig’s fourth and Ian Fleming’s character’s 24th outing at the silver screen, Spectre is the first original piece of writing in the franchise that is not based on any of Flemings work. While that could have been an opportunity to add twists and tales to a morphing character scape (thanks to Craig’s un-Bond like bond sine Casino Royale) of 007, what we get is a boring action thriller that could have been any film starring anybody.

The film opens incredibly well though- a single take shot that swims through crowded lanes on the Day of the dead carnival, we are taken from one skull mask clad mystery man to another till we reach an impeccably dressed Bond sauntering over a roof top , gun in hand getting ready to shoot someone. Culminating into a thrilling chase that also involves an edge of the seat mid-air fight in a helicopter, Spectre opens with a bang. Unfortunately for us and the film, the promise this start showed is belied the very next moment onwards. 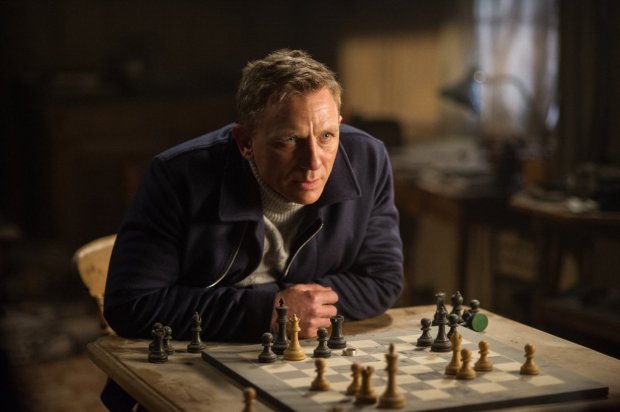 Bond, fresh from his personal quest in Quantum of Solace, is hurled into a tornado of nostalgia and memories when someone from his past is out to rid the world of life. Spectre, a secret cult/gang of criminals is something Craig’s Bond has been hunting down since 2006, we are told- as we see villains from the last three movies referenced before Christopher Waltz is introduced as the scheming mind of this one. World annihilation is promised through a vaguely described surveillance system promising to listen to every and anything on earth. The 007 programme is about to close down and Bond is to save the day. Clearly, nothing that seems doom, immediacy and a sense of dread.

So in keeping with this lack of urgency Spectre trots through its running time (at 148 minutes the longest Bond film yet) painfully.  There is none of the usual Bond traps of sex kittens on either side of the good or bad, strong menacing villains and campy air about the proceedings. The latter though was out of the picture once Craig took over with his rugged raw predatory presence and intensity, and yet seeing that so grossly underutilised in what is rumoured to be his last outing as Bond is disappointing.

Make no mistake, Craig still scores high in the part. The opening single take sequence where he saunters along the roof of a collapsing building nonchalantly adjusting his cuffs and instantly morphing into an agile death machine is quintessentially Craig- what brought the franchise a new lease of life. And then to see a plot that is so bereft of excitement is just heart breaking. So is the almost Hindi film like cant-do-no-evil bond girl in LeyaSedoux. Every time one hopes she throws up some twist to the tale, that her goody two shoes daddy issues act is a façade hiding a sinister foil to Bond.

While with Skyfall Mendes gave us a deliciously layered and brooding Bond, delving into what made him the suave cold assassin he was, Spectre does nothing to the characters arch. Yes, it does tie off the series that began with Casino Royale to some extent (hence in the process adding to the speculations over Craig being on his way out despite a fifth film in his contract) it is just not enough. Spectre is too uni-dimensional to work as an addition of rediscovering the spy genre for a new age audience, it is too unimaginative to be a tribute to the campy affairs Bond films were prior to Craig, and just too insipid to work as a simple action thriller one can enjoy. There are no surprises in Spectre at all, save for the level of boredom one plunges into as the film enters the second act.

That in fact is the greatest flaw of this edition- there is nothing to surprise us- the familiar bond theme, the hum of Aston martin, the seductive locales and thrilling car chases, everything is same as before. Leaving you yawning as Spectre plods to its underwhelming climax.  This clearly wasn’t what I went in expecting. This clearly isn’t the Bond I want.

View all posts by ameetbhuvan