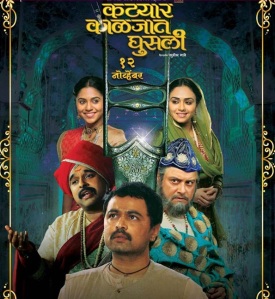 In one of the early scenes of the film, the king of Vishrampur showcases a dagger to his wife – an unusual gift for the person who will be appointed as a singer in the king’s court. In the king’s opinion, awarding the dagger to the musician will help to kill his ego and pride which often becomes the bane of many talented individuals and drives them towards self destruction.

Thus the dagger forms the center of the conflict in Katyaar Kaljat Ghusali (A Dagger Pierced Through The Heart). Based on the famous play by Purushottam Darvekar, the fictional story is set in the era when British ruled India and several talented musicians would be dependent on the generosity of the kings and their courts to exhibit their talents and make a living.

The story centers on Pandit Bhanu Shankar Shastri (Shankar Mahadevan) who has been the Raj gayak (Court Singer) in the court of the king of Vishrampur. A while later, Shastri comes across a talented singer Khansaab (Sachin Pilgaonkar), who hails from a different gharana and state. Despite the latter’s talent, luck evades him and he struggles to make ends meet. Impressed by his talent, Shastri asks Khansaab to shift to Vishrampur and helps him to earn a decent living. In the competition for being the royal singer of the court, Khan despite his talent loses to Shastri. He faces defeat for several years which sows the seeds of hatred in Khansaab’s mind and leads to a long spanning saga of hatred and jealousy.

In a brief and swiftly done flashback, the film gives us a peek into the olden days of India and establishes the story quickly. Be it meticulously recreating the bygone era of the courts, the kings and the pre independence period, the effort put behind the film is visible. The scenes which involve a musical face-off between its protagonists have also been well staged and shot. Several scenes among these stand out, including the one which establishes Khan Saab’s character and subsequently reveals his troubled life. Besides Khansaab and Shastri, the film has several other interesting characters such as Khansaab’s daughter Zareena (Amruta Khanwilkar), his wife Nabila (Sakshi Tanwar in an impressive cameo), the court poet (Pushkar Shrotri) and Sadashiv (Subodh Bhave – effective) among others.

The Hindi and Urdu dialogues which are used for a major part of the movie fits in well with the proceedings and doesn’t seem out of place like several other Marathi movies.

Though Khansaab is overcome by rage and humiliation and wants to win against Shashtriji, one never really is able to despise or loathe him when he transforms for being a humble individual to a person overcome by jealousy and ego. Similarly one never really is able to empathise with Shastriji who generously lets Khansaab win the competition. Though the story is about the rivalry between the two gharanas of musicians, their rivalry is not well established and it is only Khansaab who seems hell bent on destroying Shastriji, while the latter is content with sacrificing his talents and letting Khansaab get the better of him . Similarly, when Shastriji’s protégé Sadashiv emerges several reels later to avenge his mentor’s humiliation, one never really identifies with his struggle and his thirst for vengeance is never shared by the audience.

It also doesn’t help that Shankar Mahadevan is miscast in his maiden acting venture and his weak performance brings the film down by several notches. Mahadevan is never really able to bring out the various emotions of his characters and the role could clearly have benefitted by casting a more efficient actor. Though his rendition of the songs and Marathi pronunciation is flawless, the same cannot be said about his performance.

Some of the other characters such as the two nephews of Khansaab, who form a part of his entourage, are painfully caricatured. On several occasions, they remind you of Kadar Khan and Shakti Kapoor who played a conniving duo in many assembly line Hindi films of the 80’s. Shastriji’s daughter Uma (Mrunmayee Deshpande) also is deprived of a good screentime and though she is supposed to be in love with Sadashiv, it is never well established. 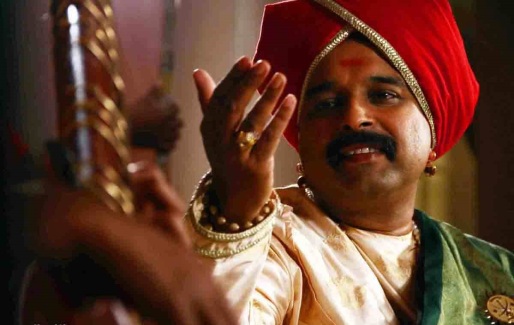 Without a doubt, the film’s biggest strength is its music. The wonderful compositions by Pandit Jitendra Abhisheki and Shankar Ehsaan Loy are used well in the film and are sure to strike a chord, especially with those who love classical music. The good use of music also helps to successfully cover up for the weak screenplay and often makes audiences overlook the same.

The cinematography of the film deserves a special mention for many of the scenes which have been shot well including a song shot in the night using fireflies. Thanks to some efficient editing, the film despite its issues and length keeps you glued to the proceedings.

As a talented musician whose ego overrides him, Sachin Pilgaonkar delivers a fine performance, though he does go overboard at times. Amruta Khanwilkar surprises with an efficient performance and rarely does it seem out of sync. Pushkar Shrotri does well, while Mrunmayee Deshpande doesn’t get much footage and a half baked character makes her case worse.

Subodh Bhave does show a flair for direction and it is evident from quite a few scenes of the film. If not for the weak and ineffective drama, the film could have been a far more accomplished affair.  Yet, the film is worth watch for its good use of music, remarkable production design and some good performances which largely make you overlook its flaws.

Note-While it is heartening to see Katyar Kaljat Ghusali being played with English subtitles,the quality of the subtitling is certainly a concern. Quite a few words have been poorly/wrongly translated and during songs sometimes the subtitles suddenly disappear. Strangely, the film is carrying subtitles in Mumbai and Maharashtra, while as per movie patrons in other cites like Delhi, the film is carrying no subtitles.

A hardcore film buff who has idols varying from Martin Scorcese to Kanti Shah to Christopher Nolan to Prabhujee to Guy Ritchie to Kanti Shah. I am here to rave and rant about all kinds of films with fellow movieholics and to spread the cinematic madness. View more posts