Tamil Cinema seems to be continuously evolving these days, gone are the days when comedy meant just the typical slapstick variety. Today while slapstick and loud comedy might still work, there’s a lot more than that available on display. With horror comedies doing well of late including Kanchana 2 and Darling this year, there is a scramble for making more such films these days. Also thanks to the success of Soodhu Kavvum, Neram and to an extent even films like Jigarthanda and Moodar Koodam, there’s a whole new market for black comedy in Tamil films, we hear of more such films getting made regularly these days. When the teaser and trailer of Vignesh Shivan’s Naanum Rowdy Dhaan (NRD from hereon) were unveiled it looked certain that this was another film in the same category. The film looked promising, especially as Vijay Sethupathi seemed to be enjoying himself, Nayantara has been having a good run of late and the talented Parthiban was also playing an important role in the film.

Anirudh’s music for the film had already become popular well before the release of the film, hence it was no wonder that the film was eagerly looked forward to. Despite clashing with a biggie like 10 Endrathukulla, the makers of NRD seemed to be quite confident about their product and why not. Having seen both these films back to back on the 2nd day of release (in Mumbai/rest of India and overseas, both these films released a day later than South India), I was initially thinking of doing a straightforward review, but somehow that just did not happen. And as I got busy over the weekend I had almost thought there was no need for another review, what with so many people expressing their opinion of the film already. But one thing after the other kept on happening, reports of how well the film is doing kept pouring in, also people seem to be more or less in love with the film and various aspects related to it. All this made me feel that its time I wrote down what I feel about the film.

Make no mistake, I am not objecting to anyone’s opinion about the film or anything associated with the film. After all I always have been of the opinion that a film review or just a feeling or observation about a film is mostly subjective. What works for me, may not work for you and vice versa. Also there is no one, I repeat no one whose words can be considered as the Gospel, so anyone and everyone is entitled to his/her own opinion. Also I bear no grudge if a movie makes money, I always feel that the industry needs hits to survive; after all it’s a cycle of sorts. With films doing well and producers making money, more the chances of their investing in other films, hopefully some of them turn out to be good films as well. Why am I saying all this? Simple, it is just to make it very clear at the outset that this is not to be looked at as a way of dumbing down NRD or as a knee jerk reaction based on the success of the movie. Not that anyone has asked me to clarify the same, but it’s always better to dispense away with the formalities before getting to the core point.

By now I am sure almost everyone knows the plot of NRD, anyways for the benefit of anyone who isn’t aware the next few lines would do the job alright. Based in Pondicherry NRD is basically a tale that revolves around Pandi (Vijay Sethupathi), Kadambari (Nayantara) and Killivalavan (Parthiban). Pandi is the son of Meena Kumari (Raadhika Sarathkumar) and while she wants him to become a cop like her, Pandi is keener on being a rowdy instead. He “prepares” himself to become a rowdy and runs a “gang” of his own which includes his friend Balaji (RJ Balaji), as they go about doing small mischief in the name of rowdyism. Kadambari is the daughter of Ravikumar (Azhagam Perumal), a cop who is a sworn enemy of Killivalavan. In their game of one upmanship, Ravikumar loses his wife and Kadambari loses her hearing in a bomb blast. Now years later Ravikumar still wants to take revenge and goes missing, leaving Kadambari frantically in search of her father. Destiny brings Pandi and Kadambari together. So what happens from thereon? What happens to Killivalavan ultimately? And does Pandi become a cop or a rowdy; NRD is a film which answers all these questions, as the tale unfolds.

The film does start off well as we see Pandi as a child debating between the virtues of a cop and rowdy and Raja,a rowdy (“Mottai” Rajendran) gives him his opinion of why a rowdy has an upper hand. This is used intelligently by Vignesh Shivan as a ploy to quickly give us the background of Ravikumar and Killivalavan and their enimity. Pandi is an interesting character no doubt, as a youth now on the one hand he keeps his mother happy by unwillingly going ahead in the selection trials to join the police, whereas his actual interest lies in becoming a don. The gang’s office and the neon painted walls with “rates of the services offered” which disappears under bright light appear interesting. Kadambari and Pandi’s initial interactions where he finds out she is deaf and tries to make an impression on her, even as his mother gets a little suspicious of his intentions are all well done. RJ Balaji for a change is quite funny, having some witty dialogues which do not irritate or annoy. Anirudh’s music is definitely a highlight of the film, there is a lot of variety that the songs carry in the film.

In particular the energetic ‘Thangamey’ (lyrics by Vignesh Shivan, vocals by Anirudh), the soulful ‘Neeyum Naanum’ (lyrics by Thamarai and vocals by Neeti Mohan and Anirudh) and the poetic ‘Yennai Maatrum Kadhale’ (lyrics by Vignesh Shivan, vocals by Sid Sriram and Anirudh) are chartbusters that you would remember after a few months as well.  NRD is also quite a visually pleasing film, George C.Williams’ cinematography rising wonderfully to the occasion. There are some particularly funny moments, like Rajendran gunning down people nonchalantly with a self-developed silencer bearing gun, the slip shod attempts by Pandi’s gang to “finish” off Killivalavan, also the climax where Parthiban in particular shines, showing us a glimpse of how good an actor he is. Vijay Sethupathi is clearly in his element and as Pandi he plays a role that’s right up his alley, carrying it out with flourish. And for his bumbling rowdy act, he is more than well supported by RJ Balaji, Rajendran and Anand Raj, all of them being quite funny indeed. And the old man in their gang who calls himself Rahul, is a good pun as well, alas the film could have done with more such stuff.

Nayantara continues her good form this year and is a treat to watch as Kadambari, the girl with a hearing disorder. Speaking her own lines here for a change, she pulls of the part childish, part silly, part goofy character extremely well. Having said that it is also a little strange that she has been projected in such a dumb fashion all through the film, she is portrayed as someone who cannot pick up profanity or double entendre in speech, and in a way she seems to be as foolish as her father Ravikumar. Why else would a cop singlehandedly try to hunt down a noted criminal, not once but twice, despite having lost his wife as well in the bargain? And while I understand that the fun element in her character would be lost if she used a hearing aid, but in reality would you find come across someone like Kadambari who appears as if she doesn’t even know that something like that exists in the World. 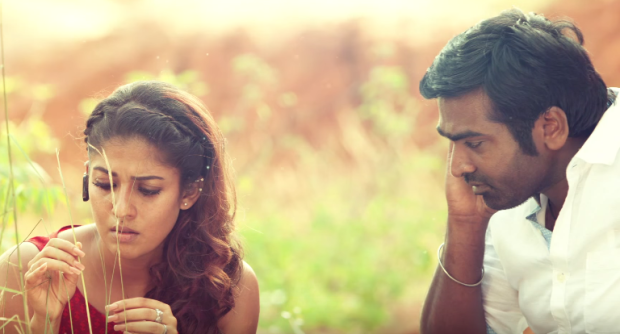 And despite a major part of the film being devoted to Kadambari’s deep burning desire to finish off Killivalavan, the way she goes about the whole thing is totally ridiculous. It would have worked wonderfully if this part was shown as a spoof, with Pandi trying in comical ways to show he is a capable rowdy who can bump off someone as powerful as Killivalavan, with disastrous results every time. But instead of seeing Killivalavan playing a comical villain, he is shown as a regular villain for most part of the film, and there is quite bit of unwanted emotional drama in between which spoils the fun. Thankfully from time to time there is something funny thrown into the plot, otherwise the momentum definitely could have gone for a toss. Now imagine that you have a have a group of odd people in a group trying to bump off a powerful don, who aspires to be a politician, who in turn also has a political rival baying for his blood, one could have gone either the completely whacky comedy route, or else turned it into an action-thriller of sorts. Sadly Vignesh Shivan’s attempt falls somewhere in between, though he has projected it as a full on comedy, very truly it does not come across as so.

There was certainly a fine entertainer lurking somewhere in the source material, something that could have been an out and out fun film. My grouse isn’t with the fact that the movie is doing well, but it is regarding how people are largely satisfied with what they got to see, not realizing what they have probably missed in the bargain. NRD is an film which eventually could have achieved so much, for some reason producer Dhanush and director Vignesh Shivan have played it easy and safe, the commercial success coming their way probably making them feel vindicated. As a reviewer and as part of the audience I will instead rue the fact that the film could have been a lot more than what it is. Is it watchable? Yes indeed. Is it wonderful? Not really.