There was a time in the early 1990’s when Malayalam cinema saw a lot of comedy films getting made, mostly having multiple leads.  Those films excelled as the actors in the lead roles themselves had a great sense of comic timing and the bonhomie between them on the screen in most cases looked very genuine. I can think of various films as examples including Ramji Rao Speaking, Mannar Mathai Speaking and In Harihar Nagar. So popular did these films go on to become that they are still remembered fondly by people and evoke nostalgia when played even now on any of the Malayalam satellite channels. A lot of these films would even have some serious topic at its core but then it would always be masked in the garb of a fun film, never ending up heavy and quite pleasing the audience. The latest Malayalam entertainer, Amar Akbar Anthony is a film which makes me remember those buddy films of the 90’s in many ways.

Nadirshah is a multifaceted individual, having started off his career as a mimicry artist in the famous Kalabhavan group and then going on to become an actor, lyricist, music composer and TV host. When I heard that he has turned director as well I wasn’t all that surprised as I only saw it as an extension of his creative pursuit. But what really caught my attention was that the film in question was titled “Amar Akbar Anthony” and it has popular actors Prithviraj, Indrajith and Jayasurya playing the leads. For someone making his debut as filmmaker I would say that it’s quite an achievement indeed to have not one but 3 popular actors in the same film. Added to it is the recall value of the film’s title, courtesy the existence of Manmohan Desai’s classic entertainer of the same name which is still fondly remembered by a lot of people. Naturally I was quite eager to see how this film has shaped out. It was also heartening to hear positive reports about the film coming in from the morning of the release date itself. In fact Amar Akbar Anthony is also a Malayalam film which has been distributed well outside Kerala, quite admirable indeed.

Amar (Prithviraj), Akbar (Jayasurya) and Anthony (Indrajith) are friends from their childhood days. All 3 of them belong to simple lower middle class backgrounds and none of them are well educated either. Amar works in a mall while Akbar is a lift operator in a hospital and Anthony is a Pizza delivery guy. They know their constraints and limitations, yet live life on their own terms and manage to balance their lives in their own ways. All of three of them have one major aspiration, a tour to Pattaya for obvious reasons, for which they keep saving, only to have the plan getting constantly cancelled due to some expenditure or the other. Jenny (Namitha Pramod) who lives in the same colony is the girl whom the trio are interested in. The film is basically all about the exploits of the 3 youngsters and how their life turns upside down due to a certain incident, it’s also about how they go on to tackle the precarious situation that they encounter unfortunately.

Well it’s quite clear that Nadirshah was basically trying to talk about the typical youth of today, a lot of them being carefree in terms of their existence and not too serious or concerned about their responsibilities or liabilities. While Amar, Akbar and Anthony too like to freak out and enjoy their booze sessions etc, it is at least heartening to at least see them being employed in some capacity and not whiling away their entire time aimlessly as seen in a lot of films these days based on youngsters. All three of them have interesting families, especially Amar and Akbar’s and their family members also have quite a good presence in the film. Nadirshah has also for some reason clearly kept the focus on his 3 main leads and their antics, so despite having scope for romance he just uses that element to move the story forward, using it also to bring out humour rather than getting serious on that front.

It’s also good to see Prithviraj, Indrajith and Jayasurya play their characters sportingly, with nothing really heroic about them actually. Even on the few occasions when you finally think ok maybe here is that big heroic moment, Nadirshah is quick to deflate the balloon slowly and smartly. Take for instance the moment when Amar and Anthony are furious on learning that Akbar has been hit by someone from another colony. We see Amar and Anthony swearing revenge, walking in slow-motion and getting on Anthony’s bike, so you would expect a fight to follow right? Not here as we see the bike refusing to start, the boys struggle to fix it up before finally giving up and crashing at Akbar’s place, postponing their revenge for later 🙂 . Such scenes abound in plenty, and it was indeed quite cheeky of Nadirshah to incorporate the First Day First Show situation of Vijay’s recent Tamil film Puli into Amar Akbar Anthony, creating quite a laugh riot with that portion.

To be honest I must admit that some 20 odd minutes into the film I was almost groaning and telling myself “OH! No don’t tell me that this is going to be all about their Pattaya adventures, probably something that goes wrong there.” Thankfully nothing of that sort happens, forget Pattaya, the film doesn’t move beyond Kochi at any point of time. The film does take a serious turn towards the end and touches upon the crucial topic of child abuse; thankfully it is handled with tact and maturity. Along with Nadirshah writers Bipin George and Vinod Unnikrishnan also need to be appreciated for ensuring that the proceedings remain pleasant and do not go over the top at any point of time. Sujith Vaassudev’s cinematography is top notch and in particular I liked the portions shot in the night, especially a particularly long segment which includes a hilarious drinking session and part of a song as well. Sujith Vaassudev even features as himself in the film in a brief one scene appearance, which was quite surprising. The film with a run time of 142 doesn’t really drag at any point of time, credit certainly to editor John Kutty for taking care of this aspect. 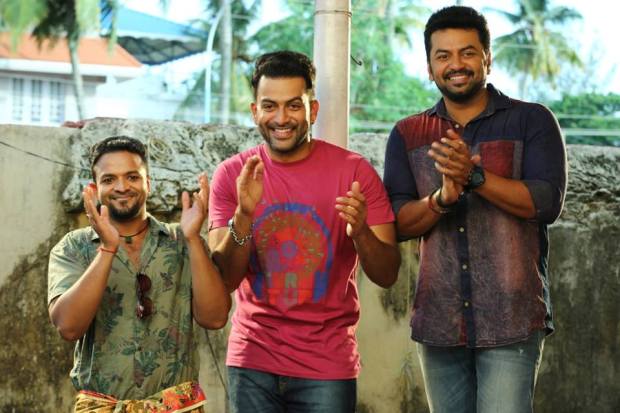 Nadirshah who has also composed the songs, has done some decent work over here and in particular the “Premamennaal” song (written by Nadirshah and sung by Prithviraj, Indrajith , Jayasurya and Kalabhavan Shajon) is quite a fun number indeed. Of the supporting cast KPAC Lalitha, Sasi Kalinga, Abu Salim and Bindu Panicker carry off the characters of the parents of Amar and Akbar’s parents quite well. Srinda Ashab, Saju Navodaya and Kalabhavan Shajon get noticed well while Namitha Pramod doesn’t really have much to do in the film, apart from being the centre of attention for the 3 male leads in the film. It is not easy for a director to ensure that in a film like this all 3 heroes get covered almost with equal visibility, but it is indeed to Nadirshah’s credit that he has managed this quite commendably. Prithviraj, Jayasurya and Indrajith play goofy characters, and aren’t the smartest of men around, all of them getting nearly equal footage and despite Prithviraj probably having a slight edge over the others, it isn’t like he is the main hero as such. All three of them are effective and they carry off their characters in style.

Amar Akbar Anthony overall is a film which works due to the situational humour, clearly evident thanks to all the bonhomie between the 3 main leads which is very visible on screen. Perhaps last seen together in Classmates (2006), this is a film which sees all 3 of them back together and in a totally different dimension. The film entertains and does it in a way that is sweet and old fashioned of sorts. If you go in expecting to see something path breaking you would be certainly disappointed, as that certainly wasn’t what Nadirshah had set out to achieve. But if all you want is some good time at the cinema this week, then go for it as you may just be in for some fun and frolic.