This review comes in a bit late and by now most of you have figured out what the movie is based on. For those who haven’t been in touch with the digital world for the past week (like me), Talvar is based on the 2008 Noida “double murder” of Arushi Talwar and Hemraj ( Get the title now? So so subtle right ?. More on the title later). I had seen the promos of this films a while ago and to be frank they didn’t quite impress me. It seemed like one of those films whose whole purpose was to cash in on the hype. But back then I didn’t notice that it was written by Vishal Bhardwaj, for whom I have high regards. If that was not compelling enough, the movie has got some good reviews overall. So coming to the question that matters,is this Talvar sharp enough to make the cut ? Read on to find out. 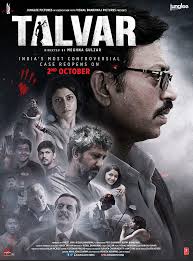 To start off I would like to say that I have been oblivious about the entire “Double Murder saga”. Neither did I follow the case then nor did I do my “research” on this topic before watching the movie. The reason for the latter being that, I feel its best to view (and review) a movie based on its cinematic merit rather than how accurately it depicted the facts. For the latter purpose there are documentaries.  Does it emote you, entertain you enough to spend you hard earned money in those multiplexes? That’s the only question that needs to be answered. That said and done, I did read a bit about the case AFTER I saw it and I must say the director has definitely being honest. For ignorant people like me, you can read about the case in brief here and here.

Now that we are done with all the background stuff let’s talk about the movie. To start off , I liked the innovative title. The not so subtle similarity with the Talwars not being the only reason for that. The director does explain the metaphor in one of the scenes where he talks about the “blind-folded Insaaf-ki-devi” having a sword in the other hand (The statue been used in umpteen number of movies but did anyone notice the sword before? Not me). Nice stuff.

The basic plot of the movie is the botched up criminal investigation following the “double-murder” case and miscarriage of justice thereon. 14 year old Shruti Tandon is found dead in her room. The initial prime suspect being the servant Khempal, whose is also found dead in the terrace later. The “shak ki sui” the points to the Tandons, the explanation for that being: There were four people in the room. Two are dead. So the rest two are the murderers,simple math-ain’t it? How I wish all our investigators were smart enough!! The local police then not only screw up the investigation by framing the parents for “ Honor Killing” (as they found the 14 year old Shruti and 45 year old Khempal in a compromising position. No facts to support that of course), but they also miss crucial pieces of evidence and botch up the crime scene. The case is then transferred to the CDI (Central Department of Investigation) team headed by Irrfan Khan. He does manage to crack down the case,; however he is then thrown off the case and a new team views the case in NEW light. The latter team is so convinced about the Tandons being guilty that they try to build evidence to suit their “theory”. 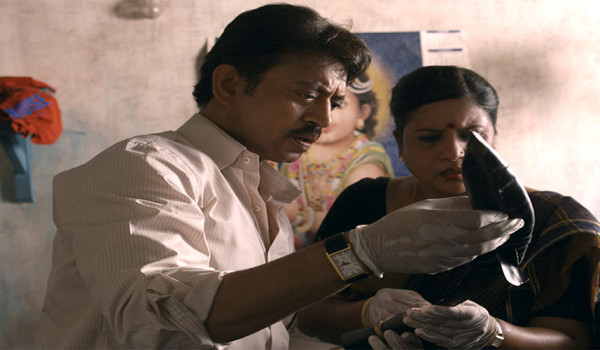 The one person that holds the film together is Irrfan Khan. He is brilliant as the eccentric CDI inspector who would play Snake on his Nokia cell phone (attention to detail, back then there was no Samsung and Temple Run!), have alcohol and cheap Indo-Chinese food at roadside joints when he is not busy busting criminals. The other character that impresses is the local inspector Dhaniram (Gajraj Rao) who screws up the investigation. He is a treat to watch with his “paan” adulterated accent and the pride he takes in “solving” the case. Some scenes are exceptional, especially the scene where the two CDI teams try to come to a common conclusion is simply superb. The arguments and the counter-arguments are well written and are quite witty . The other notable scene being the one where the CDI questions the local police for screwing up the crime scene.  There are a few songs,but they don’t interrupt the scheme of things, the last song by Rekha Bhardwaj titled “Zinda” is excellent. 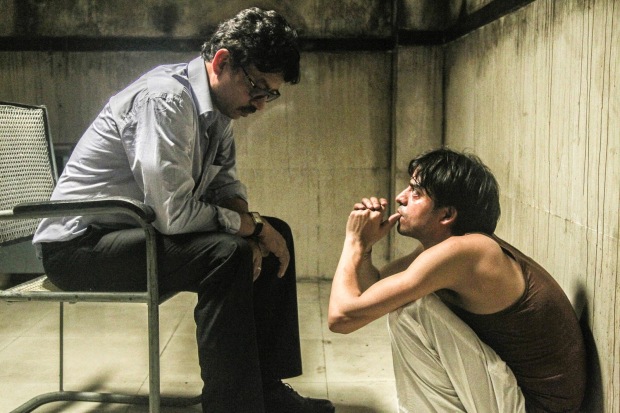 Now coming to the not so good part of the movie. The subplot of  Irrfan’s deranged married life seems unnecessary. Although Tabu and the Tabu-Irrfan combination is a pleasure to watch but then it doesn’t connect much with the main plot. The drama unfolds in the “present-past-back to present” format where the characters at times re-enact different versions of the story. This ain’t novel and at times can be a bit confusing. The majority of the focus is on the botched up police investigation and the film looks like an extended version of serial Crime Patrol in some parts. The soft corner for the parents that the director has is quite evident, but then in these kind of films that’s a necessary evil I feel as the director has to put forth the plot from one point of view and cant be totally unbiased. From the cast point of view. Neeraj Kabi (who was previously seen in Byomkesh Bakshi and Ship of Theseus) as the father is unconvincing and Konkana Sen as the mother has is mediocre (except where she says “Chalo Chalo ab rone ki acting karni hai”).

To conclude, hats off to the director for near perfect depiction of the facts pertaining to the 2008 Noida “double murder” case that shocked the Nation. From a movie point of view, the direction and writing is good in parts. This one is definitely worthy of a visit to the theaters.

P.S. My advice would be not to read /revise the facts case before going for the movie. If you do that there would be nothing novel left then in the movie.