When ace Indian mountaineer Malli Mastan Babu died earlier this year while climbing the Andes Mountains, I was quite taken aback. No I never knew him in person, but admired the fact that despite strong academic credentials (NIT Jamshedpur, IIT Kharagpur, IIM Calcutta) he opted out of a corporate career and focused on his passion of scaling mountains. And for someone so successful in the pursuit of his passion it was like an anti-climax, the way he passed away so soon but having set many milestones, including completing the Seven Summits in 2006. This was also when I realized that there are so many others like him who probably also risk their lives considerably as they go about trying to ensure that they do what they are most comfortable in, scaling new heights. I would be lying if I say that thoughts of films like Vertical Limit (2000) and Cliff Hanger (1993) didn’t cross me then, it was but a natural thing to happen. 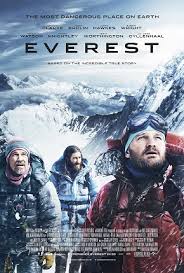 The 1996 Mount Everest disaster is widely known, respected and feared among the mountaineering community. To be honest I’m not a keen follower of the field, so had only a vague knowledge of the disaster as a passing reference. But when I heard of Baltasar Kormakur’s film on the same titled simply as Everest I was quite intrigued and was looking forward to the film. The promotional material and the star cast also suggested that this was a visual treat and perhaps an emotional ride in the offing, hence needless to say I was of course hoping that the film would deliver and meet expectations. This was a film which was being promoted well with respect to the IMAX format, with the IMAX screens seeing the release a day in advance as well. Baltasar Kormakur’s filmography includes also the Icelandic survival drama, The Deep (2012) which was Iceland’s official Oscar entry and considering he had also made big Hollywood films like Contraband (2012) and 2 Guns (2013),he seemed to be a good choice to helm a film like Everest.

In the summer of 1996 two expeditions, Adventure Consultants of New Zealand and Mountain Madness of the U.S reach Nepal with an objective of reaching the summit of Mount Everest. The Adventure Consultants team is led by Rob Hall (Jason Clarke) while the Mountain Madness team is led by Scott Fischer (Jake Gyllenhaal). Coincidentally both the teams decide to attempt the climb on 10th of May after a few weeks of acclimatisation and training, with the Base Camp of Everest serving as the epicentre for the same. In fact both the teams realize that they are not the only ones attempting the summit on the same day as there are other teams in the fray as well. During the training session when Rob Hall realizes the gravity of how having too many climbers around can be very dangerous, he suggests that the teams should come to an understanding in terms of choosing the final day of ascent but no one wants to back off. And the teams begin the climb in the early hours of May 10th from South Col and North Face, only to end up in a big struggle for survival. The weather deteriorates quickly and eventually it turns out to be a disaster of great magnitude, with many casualties and survivors rattled up as well. 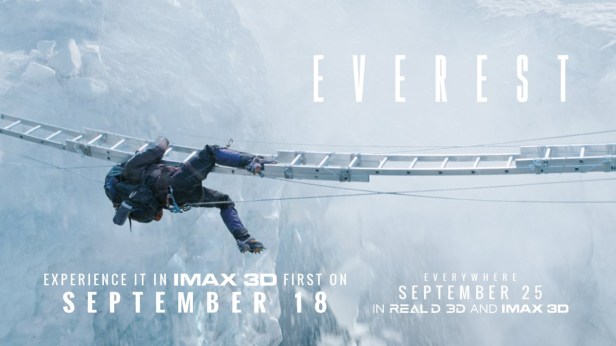 The film doesn’t really waste much time in setting up the base and we see Adventure Consultants prepping up for the expedition as Rob Hall bids goodbye to his wife Jan Arnold (Keira Knightley) who is expecting their first child in a month’s time. Their team also includes a journalist from Outside magazine, Jon Krakauer (Michael Kelly) and Beck Weathers (Josh Brolin), a doctor. Nothing much is known or shown about the Mountain Madness team as we are introduced directly to them at the Base Camp of Mount Everest where Rob Hall and Scott Fischer greet each other. In fact it’s a surprise as to why director Baltasar Kormakur decides to focus only on the Adventure Consultants group while giving the Mountain Madness group practically no scope at all in the film. Even their team leader Rob Hall barely gets enough screen time. Yes it’s a filmmaker’s call alright but it does look strange as to why there should be so much of imbalance in the tale in any case.

No doubt Everest was a difficult film to make and the effort shows, the blend of CGI and natural shots is near perfect and the film has indeed been shot on physically taxing locations including the mountains of Nepal and Italy. Salvatore Totino’s cinematography is one of the bright spots in the film as the film is a stunning visual display in every sense, so good are the visuals that at times you wonder whether to focus on the beauty of the high ranges or feel for the mountaineers who are struggling. That’s where the problem actually lies with the film, considering it’s the true story of a mission which became a disaster one should ideally feel the tension and agony that the mountaineers go through, but that doesn’t really happen. Baltasar Kormakur just presents part of what happened in a way so as to just suggest listen this is how the disaster happened, this is exactly what went wrong etc. But then considering it’s a big budget feature film, shouldn’t he have done more? Shouldn’t the audience have immersed themselves with the happenings on screen? Shouldn’t the tale have moved the viewers? Sadly that never happens. 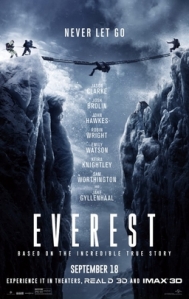 Another problem with the film is that despite the presence of a wonderful star cast most of them are under or badly utilised. How else can you explain someone like Sam Worthington being wasted totally in the film, all we get to see of him is talking endlessly on the satellite phone as he tries to coordinate the rescue mission. Same goes for Jake Gyllenhaal who gets a raw deal totally, we know nothing about him, and we don’t even get to see his struggle for survival properly. For Indians there is also a major faux paus in the film, we see the usage of the song “Yeh Ladki Hai Allah” from Kabhi Khushi Kabhi Ghum (2001) as the Adventure Consultants team pass through the streets of Nepal in a bus. But considering it was 1996 its odd as to how they end up using a song which was conceived 5 years later 🙂 .  Talking of the music I must definitely add here that the film’s background score by Dario Marianelli is quite effective and aids the narrative well.

Ultimately Everest is a case of a missed opportunity, it does have a few things going for it and the premise in particular demanded a large scale film. It’s just that the film doesn’t really deliver in the right fashion. I know it wasn’t meant to be a thriller like Vertical Limit, but then what’s the point in having a film about survival and disaster if the drama cannot really hook you absolutely.