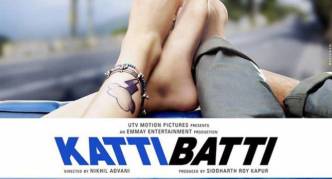 I didn’t have much expectations from Katti Batti. The trailers looked somewhat drab, the music – a vital ingredient of any worthwhile Hindi rom-com – was uninspiring, and most annoyingly Kangana Ranaut looked like stretching her ‘Tanu spirit’ beyond the thresholds of predictability and well into the zone of annoyance.

15 minutes into watching the film, almost all of my aforementioned fears came true. One by one. Even though director Nikhil Advani, who seemed to be meandering for over 2 hours, suddenly jumped on to a tragic track towards the end trying to salvage some pride, but alas, it was well and truly late by then. I had already proclaimed ‘Katti’ with Katti Batti.

Nikhil Advani, a man who started his career with the remarkable Kal Ho Na Ho (and continues to live in the shadow of that iconic film), but has gone on to direct duds like Salaam-e-Ishq, Patiala House and most recently Hero, further prolongs his bad run through Katti Batti. The film neither manages to garner the goodwill of a typical rom-com nor does it make you pull out tissue papers through its belated tragic twist. Not just that, Katti Batti also lacks conviction, originality and a proper execution of ideas and ends up being an outright boring film.

Madhav Kabra aka Maddy (Imran Khan) is an architect who is in love with Payal (Kangana Ranaut) from the moment he saw her for the first time in college. The two do not hit it off instantly, largely thanks to Madhav’s creepy, ‘chipku’ behavior, but eventually end up being in a live-in relationship for good 5 years. Things change when Payal walks out of relationship one fine day, leaving behind a whining, sobbing Maddy. The entire film revolves around Maddy’s desperate bid to get Payal back into his life while she shrugs off his advances rather heartlessly. A tiny Kal Ho Na Ho meets The Fault in Our Stars kind of twist in the end tells us that Payal does all of this knowingly; deliberately trying to push Maddy out of her life. Why? Because, she has, wait for it, cancer! Sob. Yawn. Sob. Yawn. 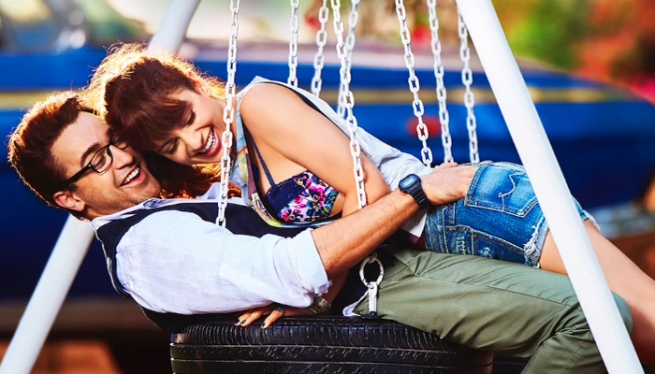 Katti Batti suffers from severe identity crisis. It does not know whether it is trying to be a treatise on break-ups and relationship issues, or it is trying to be a cute, little tear-jerker. Needless to say that while trying to be too many things at a time, it ends up being almost nothing. Consider these – the tongue-in-cheek humor and LOLworthy moments, of which we got a glimpse in the trailers, are as scarce in the film as rains are in Rajasthan. Call it smart trailer cutting or a bluff on the part of the makers, Katti Batti does not have humor, light-heartedness that it shamelessly promised. Also, the film never really builds up the romance between its lead pair – there is no breezy college dating like 2 States or a cool live-in relationship drama like Salaam Namaste. We are repeatedly told that Maddy and Payal were ‘living together for 5 years’, but we are shown no glimpses of their love, chemistry and camaraderie. As a result, it hardly bothers you when Payal leaves Maddy, or you are further disinterested when you see the later chasing the former to get things back on the track! Phew!

Similarly, the film is also not a definitive take on relationships and strings attached to it. In fact, it ends up projecting its male lead as a sheer loser who runs after the car of his ex-girlfriend like a dog and its female lead as a cruel, chaalu girl who treats men like doormats. Through the film, you feel sorry for the characters as they are poorly written and are projected in an even worse light. By the time the director tries to turn the tables by coming up with the big revelation, you are both fed up and tired by the entire sham of a rom-com that’s dished out in front of you. Maddy and Payal are simply poorly sketched out characters that fail to find any resonance with its audience.

But there are a few bright spots in Katti Batti. And surprisingly, it’s Imran Khan who is shiniest of them all. The actor, who is coming back to the silver screen after a hiatus, is affable and somewhat convincing as Madhav. He does well in the ‘crying scenes’ and you do feel for the poor guy at times, especially that dog-chasing-the-car kind of sequence. Puns and taunts aside, this character lay within the strengths of an actor like Imran Khan, and he does try hard, but is undone by a shoddy script and an even shoddier direction.

On the other hand, Kangana Ranaut replicates her Tanu act (just replace mostly Indian dresses of TWM and TWMR with some weird western outfits) through most of the film. She is predictably ‘free-spirited’, believes in ‘time-pass’ and flashes a packet of condom to a complete stranger. And not to forget, there are some trademark not-so-funny one-liners that ‘establish’ her as a ‘free woman’. But sadly, these repeated theatrics seem as fake as those feminist posts shared by thousands on Facebook every day.

Katti Batti is also let down by a below par support cast that does not have even one actor of caliber. Similarly, Shankar-Ehsaan-Loy’s music is also very average with only ‘Sau Aasoon’ getting registered in your memory. The film’s cinematography is effective while the makers could have definitely chosen a better costume designer for its lead pair.

By the time Katti Batti nears its conclusion, there are some touching scenes of Imran taking care of a cancer-afflicted Kangana, but it comes too late in the day. You feel bored, cheated and tired by then and you simply want to curse Nikhil Advani for making a mess of a film. Yet again. Stay away.

P.S. – Want to know what could be your expression if you still choose to watch this film? Check out Imran Khan’s expressions in the last image of this post.