In 1982, Mahesh Bhatt made Arth, with Shabana Azmi, Smita Patil and Kulbhushan Kharbanda. Since then, he has made it again and again atleast a 100 times. If not that, he has taken elements from Arth and twisted them around, rebottled them with new flavor, and made a film again. Arth was an absolute classic. Most of its derivatives are not. But Bhatt will never get out of it seems. And he must plunge us as well as he drowns. Directed by Mohit Suri, Hamari Adhuri Kahaani is concocted with a stellar cast, but it is supposed to be the love story of Mahesh Bhatt’s parents. In reality, it is another take on Arth. Albeit drenched in ham-fisted dialogue by Shagufta Rafique. 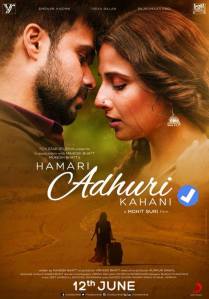 Produced by Fox Star Studios and Vishesh Films, Hamari Adhuri Kahaani (HAK) had the country chanting its numbers with scant efforts, much thanks to Mohit Suri and Mukesh Bhatt’s ear for some great music. The film looked good in the promos and right up Mohit’s alley. And indeed it is. Except the fatal flaw. Screenplay of HAK is merely a device to encapsulate the few line plot of the film, whereas as a practice, it should be the other way round. Hence, HAK suffers from largely implausible sequences which dont ring true with even an unassuming audience. The problem here is that the film is set in Mumbai, Dubai and Kolkata which are all metro cities, but the characters, specially Vasudha (Vidya Balan) do not behave like they live here. It would be more acceptable in a small town setting. To paralyze the shlock of screenplay further, Rafique’s dialogues reach their new cathartic low this time. I have often complained that Rafique is possibly the weakest link of Bhatt camp, and she continues to get worse with her dialogues. Sample this, Aarav Ruparel (Emraan Hashmi), an extremely rich hotelier, takes Vasudha to meet his mother. The mother looks at Vidya and asks, “Yeh banjaran kaun hai?”  and then gives a supremely convoluted speech about Hindu mythology – “tum toh janam se Sita ho, ab kya Sati banna hai, toh phir Radha kab banogi?” And after this astounding speech, Vasudha falls for Aarav. Woah! Who on earth talks like that? Melodrama has its perks and audience both, and I am not against melodrama. Even Suri himself has handled melodrama with much better hand in his previous films. But here we miss him as a director, while he casually steps the pedal of melodrama from the first scene. 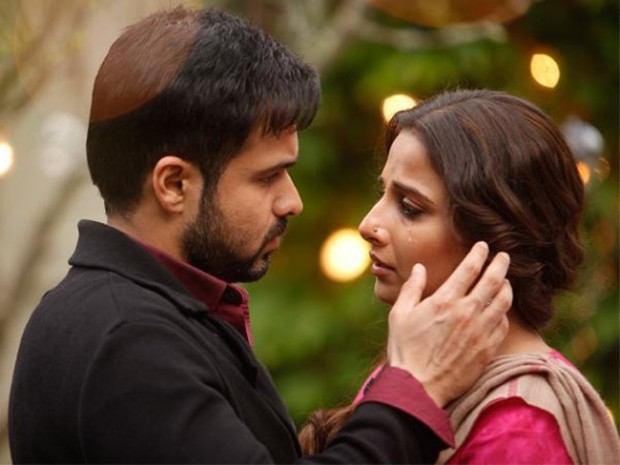 Yet, I could not get myself to hate Hamari Adhuri Kahaani, critically due to earnest performances and a slightly uplifted last 30 minutes. Emraan Hashmi may have his 7th dud in a row with HAK but he still does well here. It is hard to not look ludicrous mouthing those lines written for him but he handles them with an astute demeanor. Vidya Balan forms the crux of the film but sadly, she does not get much scope apart from shedding a stream of tears or having shed them or about to shed them. Rajkumar Rao looks a slight misfit in this film, but there are very few actors who could have pulled such a tricky multi-faceted character. And yes, his Hari is possibly the only well etched character of HAK’s script. Suhasini Mulay is unintentionally funny while Amala Akkineni is okay. There is also Prabal Panjabi as Aarav’s best friend and manager who hits the right notes to give a couple of giggles in an otherwise morose film. Suri handles the pre climax as well as the climax deftly and helps the film get a final breather. Also, his use of Music will remain one of the best. Though the whole album is not as great as an Ek Villain or Aashiqui 2, Jeet Ganguly, Mithoon and the newbie Ami Mishra have combined their efforts to give atleast 2-3 very likable songs. Vishnu Rao’s cinematography does not add much to Suri’s staging of scenes while Deven Murdeshwar’s editing is passable.

On the whole, Hamari Adhuri Kahaani is definitely Mohit Suri’s weakest film in last many years and neither does he or nor does his cast deserves such a sham. I expected a lot and I am highly underwhelmed. Save for a few bright spots, the film collapses largely due to its contrived writing. All I wanted from this film was to give Hashmi a success but I guess it wont happen. Suri himself will bounce back with his upcoming slate. The film has taken an average start at the Box Office and I am not sure if it will recover its costs this time around. Bhatt camp may have to burn their fingers, I am afraid. And that should be signal enough for Mahesh Bhatt to relook at what he is doing. Go watch Hamari Adhuri Kahaani if you have high tolerance for bad dialogue, and you might come back liking some bits of the film as well!