Apparently, there was a 10 minute standing ovation at the end of the screening of Relatos Salvajes a.k.a Wild Tales at Cannes, where it was in competition. After watching the movie, it is easy to see why. It is wild card, unlike anything that Cannes had in its catalogue, unlike anything that released in 2014 or quite a long time. Anthology films have a basic problem of disconnect due to either the theme not being elaborate or not evoking the heart and soul of the city or country it is set in. We’ve seen “Coffee and Cigarettes”, “Cities Of Love”, “Eros” suffer from this fate. Wild Tales, in 6 short vignettes of absolutely maverick and maniacal stories about ordinary men and women setting out in vengeance as they lose momentary control overcomes the general pitfalls. 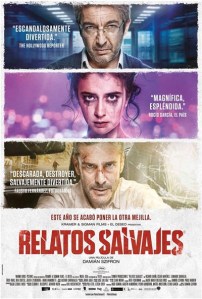 Wild Tales opens with “Pasternak”, in which a runway model (María Marull) humors a popular music critic(Darío Grandinetti) on board a flight, only to realise that they both know a man – Gabriel Pasternak. She was his former girlfriend and he attacked his work, savagely tearing it apart. In a few minutes, they realise that everyone on the flight seemingly knows Gabriel Pasternak. He gets his revenge on everyone who has ever hurt him. It is petty; it if fun and we remain amoral towards it.

The second story is “Las Ratas”, where a waitress tries to extract revenge on a loanshark that tried to seduce her mother and also foreclosed on her father, making him kill himself. The third is “El más fuerte”, about two men on the road who end up in a contest of strength. The fourth,”Bombita”, is a tale of a man brought to his knees by the system which keeps taking his car away from him and then slowly his life. The fifth, “La Propuesta”, is about a rich family negotiating terms when they find that their son has run over a pregnant woman. It is the darkest of the lot and the one which stands out a little like white hair in a young man’s otherwise dark scalp because not only is it less funnier but also more graver than everything else. It sobers the mood before the twisted and manic finale, “Hasta que la muerte nos separe”, where a woman learns of her just married husband’s infidelity and struggles to come to terms with her future.

We realise that in Wild Tales there is no need for a moral evaluation of the characters or the stories, even with the dark and twisted ones, “Las ratas” and “La propuesta”. Damián Szifrón brings us these tales to understand the way of life in his Argentina in the 21st century, the way the system works and the way people adapt to it or lose control over its stagnant and corrupt practices. It is a cynical and satirical take on the ways of the system he inhabits. More importantly, it is the representation of the burgeoning discontent of his native land, the little bomb that threatens to defuse among the general public as a corrupt system throws its weight around. It isn’t quite far from the society we live in India, so some of the stories represent our desires and anger too. The ethos of every individual cannibalised by a parasitic system is the essence of this extraordinary film. It is this common thread that binds the six episodes together, irrespective of how small or big the reason for vengeance might be.

The rage is most evident in “Bombita”, the Ricardo Darín starrer and “La propuesta”, because they are the most unsubtle. In “Bombita”, Simón Fisher (Ricardo Darín), is an engineer who deals with explosives. He repeatedly has his car towed away by the government and is exasperated by it. There is no system for his complaints to be dealt with and his wife pragmatically claims that he will always keep complaining about the corruption as the system won’t change and he doesn’t have it in him to adapt. He keeps running to offices, trying to make a statement, complaining to meet superiors, much like some of us have or have had relatives or friends claim they have. Obviously, you either adapt or fall prey to the system. Very rarely do you beat it, depending on what your definition of beating the system is. Fisher wants to beat the system and he does it, in his own way. The reaction to this is that he gets the name “Dynamite” and an entire population comes to his support, people on twitter and even people in jail. He is heralded as someone who gave it back to the system. It isn’t the tale itself that makes it one of Wild Tales’ important vignettes. It is rather a scene where he sits in front of a judge and his wife’s divorce lawyer tells him that there’s violence everywhere she sees. When you see the film, every tale has its own act of violence. There are things breaking, objects flying, mirrors shattering and even blood oozing. It is there everywhere.

In “La propuesta”, a young boy from a rich and affluent family runs over a pregnant woman. He doesn’t stop to see what has happened to her. He goes home, sobs and his mother tells the father, Maurice, that he should make sure that the son doesn’t go to jail. Already, the bottom of our stomach starts sickening. Hit and run cases with rich families as we have seen in Indian cinema has the gardener or the driver taking the blame and a lot of money exchanging hands between lawyers, cops and judges. “La propuesta” is a stylised version of the same. The humor is in the negotiation of the deal but we see the caretaker become greedy when he learns the price of the lawyer, the lawyer becoming greedy when he knows he holds the cards. “Vultures”, labels Maurice. Everywhere, people are crippled and left to die by a corrupt system, which continues to feed from them like vultures.

Damián Szifrón’s brilliance is most evident in “Hasta que la muerte nos separe”, where he makes an act of personal vendetta so thrilling and so full of humor that it becomes both funny and scary at the same time. The tone is evident right from “Pasternak”, which is his most stunning act of violence. But it all compounds and becomes a satisfying and happy finale in “Hasta que la muerte nos separe”. Szifrón reminds us that despite everything, people compromise, they see past faults and learn to make amends, even if the system doesn’t. Without an overbearing and dysfunctional system rearing its head, people learn to set aside differences and learn to live together. Szifrón’s triumph is that he is able to tell us all this through 6 tales each with different kinds of tension and humor. “El más fuerte” has the tension of Spielberg’s “Duel”and there are influences of Pedro Almodóvar in “Pasternak” and also thorough out the movie in the sudden sexual, emotional and violent outbursts.

Like the cook says in “Las Ratas”, prison might offer a better and more comfortable life than the struggle in a broken and self-serving system but then she’ll also miss something as exquisite and remarkable as Szifrón’s Wild Tales.