After having watched Whiplash twice, and contemplated relaxation a dozen times, I am writing this piece. I am not relaxed. No sir, I am not. This one little film, took me by my collar, and jolted me out of the lazy Saturday evenings like the devil spanking my brain. Yet, I just cannot look away from it. This one film, one little, mostly shot inside rooms, low key, low production value drama film which could well be on stage (actually, it can’t) has more excitement and pulse pounding thrill than, say, Godzilla.

Whiplash lives on people so honest to themselves that it becomes terrifying, as it progresses. As they say one act of defiance deserves another. And defiance leads to loss, which leads to vengeance. And, vengeance exists, between a teacher and a student, inside a music school’s practise room. Where that school’s premiere Jazz band practices. With precise instructions from an almost dictator like master who draws the rules, and asks his players to stick by them, ferociously.

He finds a kid, right in the beginning of the film, beating. A drum set. He challenges him, teases him, and lets him know he cares, and he cares a damn, and leaves the kid hanging. That’s how he, presumably, locates greatness, brings him along, and then thwarts the ego of the player, over and over and over again, with agony, with challenge, with devastation, and, in no small measure, abuse. He repeats a story of how Jo Jones led to Charlie “Bird” Parker’s success by throwing a cymbal at him and almost killing him (though I found out that this story is not true, but more about it later). He says he believes in how greatness can be achieved by forcing the artist towards it. By pushing them beyond what they think they are capable of.

And there lies my problem. As a film, I totally love it. It’s so intense in delivering a shattering experience that when it ends, you feel like you’ve been whipped and lashed. The movie beats hard like a percussion solo, and puts you through one hell of an experience. But, my dear friends…I have a problem. Not with the film craft, but with the subject of teaching, and imparting knowledge, and pursuing excellence; the stuff this film is all about. Be it of any kind. This one includes playing music. Especially because the movie depends on the relationship between a teacher and a student, and the role of a teacher in a student’s life.

I totally have a problem with how Terence Fletcher regards his band members. And that’s how, seemingly, it happens in a creative field, and, presumably, that’s how greatness is achieved. But, let’s go back to the Charlie Parker story Fletcher reiterates through the running time of the film. Charlie Parker, as it is said, was performing in a club. He got the groove but wasn’t serious about it. One evening, he just kept playing a mess of a melody while rest of the band stopped. Audience started laughing, and, as Fletcher says, drummer Jo Jones pulled the cymbal out of his drum set and hurled it at Parker who ducked to save himself from getting decapitated. Shocked, he realized audience was laughing at him, he wept through the night but the next day onwards he practised. And exactly a year later, in the same club, he pulled a miracle. Same audience had their jaws dropped at the saxophone genius he’d become.

Great story, *BUT*, it’s not true in its entirety. First of all, internet tells me Jo Jones didn’t hurl the cymbal at Parker, rather he simply dropped it on the floor to bring Parker back from the stupid dreamland of arrogance he was into. Secondly, from what I learnt about Parker, he didn’t simply practise a year for a one note performance ending up with a single melody. He studied. Collected himself, listened music, understood, developed, talked, met, and most of all, he studied. He learnt music, absorbed it, and instead of memorizing something his master would have expected, he developed a sense of music. Probably that’s why, during the climax of Whiplash, Neiman is unable to get even the basic beats right for a tune he wasn’t prepared for. Because…his master never developed music in him. He, like programming a robot, fed the pieces into his band, asked them to learn the notes, with minimal room for improvisation and development, perfected the “sound” of the piece. While, I must admit, the best of the music has mostly been a result of jamming. 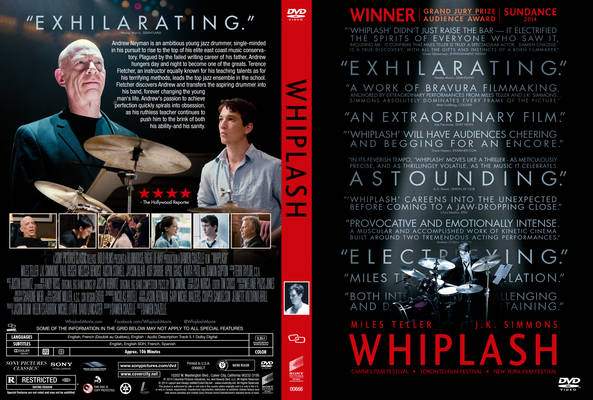 In a strange, overbearing manner, there is no jamming in the film. None at all. The point of a percussion instrument is to understand melodies, not just one, to be able to support, and elevate music even if the players never synced before. Percussion in itself cannot be music. That’s the reality of being the dark horse of music production. But, no music is complete without it, and a drummer needs to understand the melody and bass it, which Neiman fails on. Because, well, his master didn’t let him develop the skill of improvisation.

Long ago, a teacher of mine told me that the point of a teacher is to show the direction. Not solve the problem, not impart his expertise upon the student, neither give the students a vehicle to reach his destination, but to point him in the right direction. And that’s it. Teacher needs to let his students figure out, which rarely happens in Whiplash. It’s always Fletcher’s piece instead of his band’s piece, and the tunes they play are classics, not even Fletcher’s own. He’s just a conductor. And that’s it. And because he’s a part of a music school his job is to elevate the students. Let them improvise instead of asking them to double up on the beats.

I know, I know, that all those principles would never a terrific movie make. And maybe I am seeing a little too much into the movies, but then, movies do influence me, and there is something I needed to get out. Moreover, it did remind me of Last Tango in Paris somehow. The story of 2 mad people drawn to each other due to some strange, common obsession. When one of them comes to terms with reality, disaster ensues.

But, for once, I declare, art (or any kind of learning, for that matter) is not about treading the lines, and following the rules. It’s about disrupting and breaking free. And teaching is all about enabling it. As someone who was forced to tread lines, learn music, and earn a certificate in it (Sangeet Visharad in Tabla, no less), only to end up not listening to music at all, and caring little about it today, I can say great art is not something that can be forcibly driven out of someone. And I can say that for a fact. There’s a reason why Terence Fletcher never found a Charlie Parker, something he laments. No teacher ever found a Charlie Parker. Charlie Parker found himself.

Professionally, a Guy in IT. Also, a Film-Maker, and a Blogger. Check links below, and on the left for more. View all posts by Salil Shankar