During the course of the movie Lingaa, we are introduced to a man in the year 1939, travelling in a train, reading a copy of ‘The Hero with Thousand Faces’.  From behind the book emerges our hero, Rajinikanth- the hero with a single face. The same ‘you have seen it once, you have seen it all’ face that is enough to send a frenzy amongst his die hard fans.

So what if he is reading the book a decade before it was originally published?  What no one can, Rajini certainly can!

And there are also a lot of things only Rajini ‘can’.  Like take on the British Empire single-handedly and build up a whole dam from his own pocket money. You got that ‘dam’ right!

Or turn into an engineer or a collector or a cook or a crook or even a royal maharaja at one’s own will because…the script demands.

And if that is still not enough, then you need to check out the equally over-the-top climax to see how much of this outrageousness he can get away with.

But as long as you promise not to ask yourself such ridiculous questions at the sight of such equally preposterous moments onscreen in the name of entertainment, then you should be able to survive a viewing of the superstar’s latest live action offering Lingaa.

The stress obviously falls on live-action because Rajini did have a motion captured animation avatar earlier this year with Kochadaiiyaan, which unfortunately met with disastrous results. But even though the animation and technology failed to live up to the high standards, Rajini’s efforts and charisma shone through. And it was equally saved thanks to Rahman’s score and Ravikumar’s writing. Unfortunately neither Rahman nor Ravikumar manages to come to Rajini’s rescue this time around.

K.S Ravikumar’s adopts a similar and familiar template with the story telling as well. Close on the heels of Kaththi comes yet another story about a small time crook who lands up to be a saviour for the villagers. 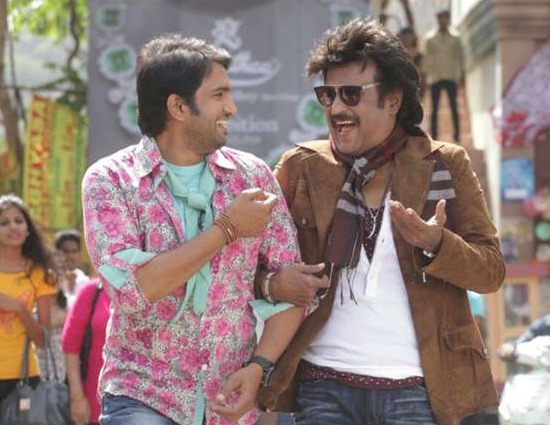 With the future of the small village seem to be in jeopardy, the village chief (K.Vishwanath) proclaims that it is time to open the village temple that has been shut for over seventy odd years. However the only condition is that it must be opened by none other than the bloodline of the famous Raja Lingeswaram, the man who the villagers revere as God.

So get ready for a superstar entrance, as we are introduced to the grandson Lingaa who is a petty thief with his own band of merry men (the likes of  Santhanam and Karunakaran).

To save us the trouble and time, they are tracked down rather effortlessly by the village head’s daughter and city TV reporter (Anushka Shetty). However the struggle is to eventually get Lingaa to head to the village.

Once we are back in the village, young Lingaa (and the viewers) is given a history update on this great personality that everyone worships. We are shown how Lingeswaram (Rajini in the double role) a royal blood, left his post as Collector with the British Empire and worked tirelessly for the welfare of the villagers by constructing a dam out of his own wealth.

What does that have anything to do with the current situation of the village? Watch and find it out for yourself (…if you can)!

Director Ravikumar throws in all the usual and mandatory Rajini ingredients. The first half is light and the humour touch by Rajini-Santhanam works wonders.  But the second half, things are more heavy handed, and the script gets burdened with all the social messages and patriotism being thrown in. It is evident that the writing team are running out of ways to get the movie forward and by the time we reach the climax, it becomes not only a tried and tested route, but also a tiring one.

And the lack of a strong fitting villain fitting the stature of our larger than life hero contributes to the lack of excitement to the proceedings.

The film is riding solely on the shoulders of Rajinikanth, and everyone knows if anyone can, then it is Rajini. He effortlessly romances, fights and is at equal ease with emotions as well as comedy. It is a different matter though when it comes to dancing.

Santanam manages to shine with his trademark one liners. Sonakshi makes an impressive debut in South Indian cinema as the village belle, while Anushka is so-so. Jagapati Babu is terribly wasted. The rest of the cast just seem happy to show up and share screen space with the legendary actor.

The editing team seem to be non-existent. The heist sequence in the first half, though the generator of most laughs, keeps going on and on far longer than it had to. Similarly the train fight sequence in the pre-Independence portions. The flashback portions should also have been trimmed drastically to keep the impact stronger.

Yes, kudos to the team of Ravikumar and producer Venkatesh, for managing to wrap a superstar project like Lingaa under six months and successfully stick to the superstar’s birthday  as a release date. Sabu Cyril and the art direction department certainly warrant a special mention for their efforts, especially the dam.  But the CGI is a huge disappointment and act as a dampener in several of the key sequences. And the less said about the atrocious climax, the better.

Rahman’s music as mentioned above is a disappointment and the picturisation also does not help the cause. The intro number appears stale and caricaturing and despite all the energy of the Mona Gasolina number , it appears a poor cousin of Athiradi (Sivaji) number.  The song sequences sorely misses the Shankar touch which made Rajini’s previous two outings a visual treat. Only ‘Indiane’ makes some sort of impact.

If you are game for the same vintage Rajini stuff in the same ol’ bottle, you may manage to endure this Lingaa with a smile. But the truth is there is not much going for this mediocre superstar vehicle to make it stand out from the rest.