Every time you develop a pre-conceived notion, some higher power quietly smirks to mock you. Many a times it has been proclaimed loud and clear, do not judge a book by its cover, and yet the human nature is such that we do inevitably conjure up a feeling by just looking at things and not experiencing them. Now that the life gyaan is over, I must admit that despite many years of writing film reviews, I can’t help forming an opinion of the film before even seeing it, like most of us. However, I try my best to not force the opinion on anyone before I get to see the film, neither do I fish around for the buzz or response to the film before buying the ticket. On first chance, I walk up to the window and purchase the ticket, ready to see my predilection turn true or false. The beauty lies in being surprised with a crash of your earlier notion. Khoobsurat is one such film.

When the trailer of Disney’s Khoobsurat came out, I strongly felt that it reeked of a disaster recipe. Sonam Kapoor pulling off another Aisha, at the expense of her in house company, Anil Kapoor Films. It looked bland and campy. What I did not check for before is that the film has some decent names behind it – Shashanka Ghosh (director), Juhi Chaturvedi (Dialogues) and Sneha Khanwalkar (Music). While Ghosh made Waisa Bhi Hota Hai Part 2 (2003) and Quick Gun Murugan (2009), Juhi is the one responsible for giving us Vicky Donor (2012) and if you dont know about Sneha, then you should not be reading this review. Incidentally, it is them, along with screenwriter Indira Bisht that make this Disney princess spinoff of a Hrishikesh Mukherjee classic constantly watchable and a pure delight for most parts. The music had started catching on to the ears early but I was finding it hard to get rid of my view of the film, well, until I saw it and was pleasantly stunned. The film is far from perfect and the story loses all its steam in the second half, with the writers and director trying to repeat everything they have already done. But it is the breeziness that sails it through. Time and again, I have maintained that there is a method to do formula well. Khoobsurat almost hits the right notes of that method.

Crackling (yet not so fresh) scene design, great visuals (the warmth), super dialogue (even by caricature-ish characters) and some good performances can take a film long way. Bisht and Ghosh spur up a world of royals, the Rathores, and plant a bubbly misfit, Mili, amongst them. A surefire idea takes a spin and cruises along with some brains being put into the proceedings. Despite its complete banal predictability, Mili’s journey is constantly cheerful and inducing pleasantries across the screen. Somewhere along the way, you tend to ignore that Ghosh uses the most traditional tropes to woo you and you start enjoying the process. Khoobsurat is infectious from the first frame and you know a lot of this film is going to get it right, and you start chuckling at each tantrum of Mili against a stuff royal family. The constant sexual tension between the lead pair is well explored, and the resolution is handled without unnecessary emotional baggage. Not bad, eh?

Produced by Disney UTV and Anil Kapoor Films, Khoobsurat is doused with efficient production values. Shruti Gupte’s Production Design, the Costume Design and Tushar Kanti Ray’s Cinematography work hand in hand to create a very easy-on-the-eyes film. Sneha Khanwalkar’s music and Simaab Sen’s Background Score garnish the film with much of the required ambience. Engine Ki Seeti, Abhi Toh Party Shuru and Naina are all good enough songs. Bakul Matiyani’s Editing could have done with a further 10 minute chop and some smoother cuts. However, it is Juhi’s dialogues that considerably increase the likability of the film even as very familiar characters mouth them. Overall, it is money well spent. From the writer’s point of view, there is not much that could have been done with the story but Bisht still chooses smart scenes to tell it. 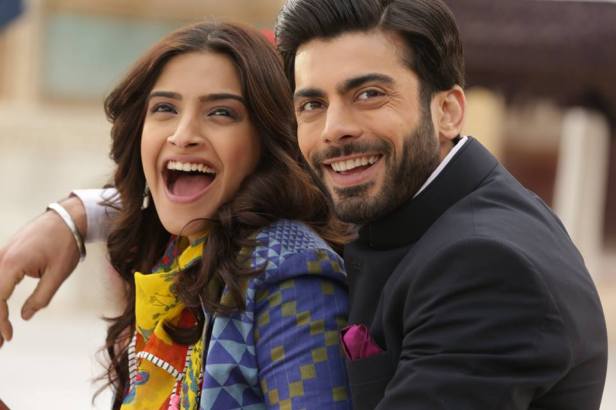 The film unfolds like a fairy tale and Sonam Kapoor fits right in. Putting a gamut of despicable performances behind her, Sonam brings the right props to the sets of Khoobsurat. Mili, a character fleshed right out of her comfort zone, allows her to play the goofy, incorrigible and lovable all in right amounts without ever looking annoying. Fawad Khan (Prince Vikram), for those who do not know, did exceptionally well in the Pakistani film Khuda Kay Liye. In Khoobsurat, he looks dapper, acts like anything but a newcomer, and leaves us with a ray of hope that he will be offered much better roles as well. Kirron Kher adds to the ensemble by another version of the Punjabi mom and does well again. Ratna Pathak Shah steps into the shoes of her mother, Dina Pathak who played the same part in Mukherjee’s original and delivers a solid punch. Aamir Raza Hussain, as Vikram’s father, is a nice find. Cyrus Sahukar still makes a mark in a couple of scenes. Most of the supporting cast is strikingly good which does not leave a sore patch on the film.

On the whole, Khoobsurat is a sweet surprise at the Box Office this weekend. A few days ago, a bunch of my friends were really excited to watch it this weekend and I found myself almost dismissing them. But I seem to get it now. The producers have positioned the film remarkably as the unavoidable chick flick which you must go for and it works. The collections for this weekend have not been that great but I hope they pick up. It is a harmless film that promises you a perfectly enjoyable time for a runtime of 130 minutes. Glitches and lack of freshness may trouble you but the sugar with a twist treatment will get to you eventually. Go for it?

One thought on “Khoobsurat Movie Review: A Sweet Surprise”