By the end of the Second World War, Britain had lost the status it held in the world of politics. It never was a sporting nation that lit up the track and field circuit without the countries it had conquered and it was a nation fading in the impact it had on how the world ran but culturally, London was always a fine place and Britain back in the 60s and 70s was not just London. When bands like Led Zeppelin, The Who, The Rollin Stones, The Beatles etc. left to conquer America, it was an invasion of sound, an invasion of fashion a lifestyle that the Americans were being introduced to. Jazz, the American jewel was fading. The boys with the accent were flashing their wares, talking about love with a sprightly tone that didn’t come from Chicago, Memphis or Texas where there was soul, where the blues became a medicine to see another day. Britain started exporting its cultural movements; it became embroiled in political unrest. Not just England but Ireland, their brother up North, the Celtic lads, everyone was at war, an internal strife and from the  boats dropped the Ramones with their swanky unkempt hair, leather jackets, torn jeans and square coolers and guitar players playing three chord faster than the BMW revved up and they gave London and its sisters hope, a way to show their angst and so was born Punk Rock, the one that John Peel, the greatest Radio DJ the world has known took up after pounding people with Pink Floyd and prog rock for a good period of almost a decade.

“Good Vibrations“, a film directed by Lisa Barros D’sa and Glenn Leyburn and written by Colin Carberry and Glenn Patterson, paints a romantic picture about the life of Terri Hooley(Richard Dormer), the man who came to be known as The Godfather of Belfast Punk. The city he knows is warring, religion’s divided them up. There are buildings with graffiti at the top, signs reading For The Loyal Wives and Smash The Bricks and in the city, smack in the center of the block, he puts put an Elvis Presley life size cut out and opens the “Good Vibrations” record store. A DJ who hallucinates about Hank Williams Sr. from his childhood(reminiscent of the Bruce Springsteen hallucination from Stephen Frears’ High Fidelity), he opens the record store with the intention of bringing reggae music to his country, to bring the people back together, seeing a parallel between the political situation in Jamaica and Northern Ireland.

Terri Hooley’s a man whose decision are spur of the moment, he mortgages his house to start the business and in a country where the cops regulate even two people standing together, selling music is not the brightest of ideas but this isn’t your man for logic, it’s the romance of seeing his city fill with people again, at peace, showing up without distinction of whether someone’s Marxist, capitalist, feminist, Catholic or Protestant. It’s an idealistic, impractical step but then when have idealists been practical. Richard Dormer serves us Terri Hooley like The Clash serves the world London Calling. It is hot cakes here and it’s impossible not to lap it up.

Much like High Fidelity, this isn’t just a man with a record collection to boast about setting up shop, it’s a dreamer’s palace, one where young rockers are bred. A kid shows up to have a poster put up on the board, describing a local gig, printed upstairs at Hooley’s friend Dave’s(Michael Colgan) printing press and we see a discussion about music, where the record guy is introduced to a world he hasn’t yet heard of. It’s that moment when opportunity knocks your door and Terri Hooley only notices that there’s a local gig being put up by kids. The Rolling Stones tour poster is replaced by this local gig. It is a symbol of the times that we are going to step into. It is the time when British music was backing away from the blues based rock bands and going towards speed, angst and the “anarchist”, youthful punk sound. Like his peers, like John Peel, he understands what he is stepping into and what a wonderfully shot sequence we have at the gig venue to have this baptism, this introduction to a culture.

As they sit in the club and the cops enter to harass the young kids, Terri Hooley steps up and is swayed by the punks on stage who make the crowd join them in showing the finger to the cops. It is this singular moment that defines what punk rock is, what the soul of the whole moment is about. It isn’t about showing the finger to the cops, it is about speaking out at the injustice; it is about having a voice and taking a stand. From the alcohol driven, drugs for food, long maned rock Gods, the world was being taken away by people off the streets with minimal technical gifts, fueled by angst and a need to be heard and we hear Rudi perform “Big Time”, the song that starts off Good Vibrations, the record label.

The directors know that we need to romance Terri Hooley to buy this predictable tale and they use Richard Dormer and humour to great effect to do that. They don’t overwhelm us with the seriousness of the civil war. We don’t see the strife here, it is never shown in principle except in one archive footage but we know that things are not good. We see empty bars, people with hollowed eyes, and streets with no people and walls with graffiti. We don’t need the war to understand Punk Rock or the man whom people considered The Godfather Of Belfast Punk. The writers don’t make us romance Terri by giving him an all-white image. They show us that he isn’t an easy man. Like many people who aren’t used to fame, we see it reach his head and find him neglect everything else. 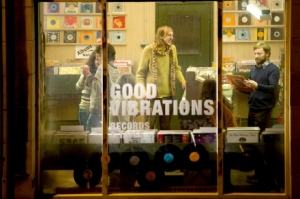 Some of the best scenes in the movie are the ones with Terri Hooley and his socialist dad (Karl Johnson). There’s some very good dialogue here, especially the one where the father tells his son about how victory is what people make of it and how it varies from person to person. His relationship with his wife Ruth is predictable. There’s tenderness in Jodie Whittaker’s Ruth and like every good wife of a man who doesn’t open his eyes, she suffers silently but stands by him sturdily. It is clichéd, like most tales about great men are.

In a scene in “Good Vibrations”, Richard Dormer is up on stage and tells us about Punk Rock – “New York has the hairstyle, London has the trousers and Belfast has the reason.” This one line sums up Punk Rock, the movement and Terri Hooley, the person. The directors position this tale like a marketing pitch, a pitch that is a winner from the moment it has Terri Hooley’s initiation scene. It only builds from there, drawing us into the life of a man whose decisions are impractical, ruled by the heart and Dormer’s toothy grinning, bearded Terri Hooley is elevated to messianic status as the film ends but the success of this tale depends on how much of a romantic one is about the way of life, music and punk rock.

“Good Vibrations” is not a tale about a man opening a record store in a war zone, it is about the society that he envisioned and brought to his city. There are shots composed so artfully that some might just be the kind of photographs you find in art galleries and then there are ones that you put up by the bedside and stare at when you wake up in the morning. There’s gentleness to the light when Ruth and Terri are together and a hallowed glow that follows Terri when he is holding court. It’s not a hollow glow, it is artful, seductive in the way it gives us a man to remember, a man with whom one could sing Sonny Bono’s “Laugh At Me”.

It is not a perfect film because of the clichés it embraces. The characters are not new but the actors’ magnetism and the movement it presents rise above this and it is for this reason when the all-important moment when the packed Ulster Hall comes to life, I found myself smiling, the warmth of achievement caressing me and asking me to hug myself tight to encase that tender moment. It’s moments like these that make movies the treasure house they are. In the end it is the tale of a man’s love, a man’s belief that things can get better. It is his passion for music and the power he believes it possesses. It warms my heart; it allows me to forgive the clichés and the predictable writing.

Like John Peel playing “Teenage Kicks” twice in one radio session, I’d play Good Vibrations on repeat. It’s like the Beach Boys song of the same name in terms of emotion; an emotion so pure and heartfelt that it promises not to die in you. It isn’t the story of an underdog, it is the story of something that mattered, something that isn’t lost by the bonfire but is retold so that even the newest addition to a family grows up with it, inculcates it to the point that it becomes a way of life. Good Vibrations is lovely film-making about a city, its music and a man who rose above his station for the greater good. It is a devotee’s labour, a labour that’s fulfilled and overwhelming.