Note- This is not a straightforward review of the film, instead it’s a personal tribute to Sibi Malayil’s iconic film which incidentally released this day, 25 years ago.

I was named after my paternal grandfather in a rather filmy sort of manner. My grandmother lay seriously ill a few months before I was born and call it a strange premonition or not; she called over my mother one day and said “I feel that I just may not be alive when my grandson/granddaughter is born. In case if it’s a boy, please promise me that you will name him after your father–in-law, i.e the boy’s grandfather”. And so my mother promised to do so and my grandmother indeed passed away a few weeks later. I ended up getting to be named as Sethumadhavan, taking after my grandfather. But unlike what the elders at home might have thought of, from the time I remember going to school I really started disliking my name.

While people around me were all having relatively simpler names like Ravi, Sunil, Dilip and so on I found my name to be too traditional and totally ‘uncool’. What added to my misery was my paternal grandfather naming my younger brother as Pradeep, something which put me off completely :). As I slowly became more and more interested in films my mother would try to comfort me that my name was special and I could also look up to the popular film director, K.S.Sethumadhavan for inspiration as I shared my name with him. Even that did not really wipe away my anguish, but little did I know that very soon things would change and that I would finally go on to accept my name gracefully and even feel happy about it. So why am I going down memory lane and talking about my life story when I am supposed to share my thoughts about the popular Malayalam film Kireedam? Well by now anyone and everyone who has seen the film would probably understand why this back-story was needed :).

The year was 1989 and I was yet to enter my teens, that was also the time when Malayalam Cinema was probably going through its best phase ever, but strangely I wasn’t too impressed then. Well as a kid it was mainly action and comedy films that held my attention, so every time my folks wanted me to come along to watch a Malayalam movie, I would throw a fit if it wasn’t either an action or comedy film. Strange as that might sound now but then those were some truly different days indeed. Sibi Malayil’s Kireedam (The Crown) released then and initially my parents did not take me and my brother to watch the movie. I wasn’t too upset about it till I heard that the film has some really strong ‘violent’ portions and that Mohanlal plays a youngster named Sethumadhavan. Pretty soon the film was being talked about a lot and that was when I watched the film and finally felt a sense of pride on seeing one of my favourite actors play a powerful role bearing my name. 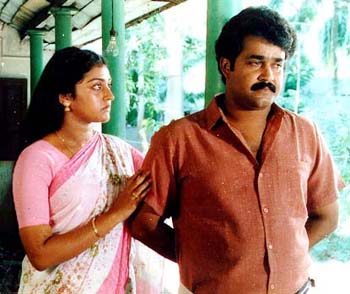 The combination of director Sibi Malayil and writer A.K.Lohithadas has gone to create some wonderful Malayalam movies, starting from Thaniyavarthanam (1987) and going all the way up to Sagaram Sakshi (1994), a total of 14 films in all. Kireedam for me ranks right on top of the list, a list that also comprises of gems like Dasharatham, His Highness Abdullah, Bharatham etc and hence it’s a rather special film on all counts. This is also a film that I have gone on to re-visit a few more times over the years and I also got to see at least 2 of its 4 other language remakes, Gardish (1993-Hindi) and Kireedam (2007-Tamil) while I am yet to watch the other 2 versions (Rowdyism Nasinchali,1990-Telugu and Modadha Mareyalli, 1991-Kannada). In fact every time I re-visit the film I can only marvel at the intensity that the film generates at various points of the film and the kind of standout performances that Mohanlal and Thilakan, inarguably 2 of India’s finest ever actors have churned out.

Kireedam is a wonderful example when it comes to portraying life of a typical middle class Malayalee household in the late 1980’s. The setting is authentic, the people literally live the characters that they portray and we are easily drawn into the narrative as we experience a feeling of being part of it in a way. The film revolves mainly around Achuthan Nair (Thilakan), a police constable who leads a simple life with his family comprising of his wife, 2 sons and daughters. Hi major desire is to see his eldest son Sethumadhavan (Mohanlal) become a police inspector, and Sethumadhavan himself is determined to live up to his father’s expectations. Sethu is engaged to Devi (Parvathy), the daughter of his maternal uncle and they are happily looking forward to a wonderful future. Unfortunately one day Achuthan Nair is transferred to Ramapuram for having charged the son of a local MLA in a petty case. The entire family shifts along with him to Ramapuram. While everything is looking good for the family, things take a turn one day when Sethu sees his father getting beaten up by a local thug, Keerikkadan Jose (Mohan Raj). Sethu steps in to save his father and ends up beating up Keerikadan Jose, but then unexpectedly the entire market responds by hailing the downfall of a criminal and the rise of a saviour.

This is when things start getting complicated in the life of Sethu and the wonderful relationship between him and his father Achuthan begins to get strained. Circumstances begin to go against Sethu as he gets further and further involved in things which he doesn’t want to be part of, ending up losing his ladylove Devi as well in the process. What happens from thereon in the lives of the father and son is what the rest of the film is all about which culminates in a climax, that could well and truly serve as an inspiration for aspiring writers, director and actors. The film is filled with wonderful moments, all of which bring in the required dimensions to the movie. Take for example the scene when Sethu and Devi are watching their respective fathers enjoy a round of drinks from behind a window and enjoying a private moment themselves, only to be caught by their grandmother. Or the dining room scenes, such scenes are filled with subtle humour and reflect upon what could be happening in our homes as well.

The action sequences are shot wonderfully and build up the tension adequately. The two market fights in particular are commendable, more so considering the huge crowd in the background, which wouldn’t have been easy to handle considering the logistics involved. The cinematography by S.Kumar also deserves a mention especially for the way the action sequences have been picturised, especially with a specific use of tone and hue. L.Bhoominathan’s editing is again praiseworthy as there’s not a single moment in the film where you feel the pace slacken. Johnson’s music is good and the ‘Kanneer Poovinte’ song (sung by M.G.Sreekumar and lyrics by Kaithapram) conveys the melancholic mood at that part of the film wonderfully. Kireedam is also a film which is considered to be a milestone for most of the actors involved in the film. Cochin Haneefa who was more popular for his negative roles, played the role Haidrose, a local thug with a comic element wonderfully, paving the way for the start of his career as comedian. He went on to reprise the same role in the Tamil version of the film as well.

Mohan Raj till date is remembered fondly by the Malayalam audience as Kirekkadan Jose, such is the impact that he generated with his presence in Kireedam. Parvathy, Kaviyoor Ponnamma, Murali, Jagathy Sreekumar, Sreenath, Manianpilla Raju, Jagadish, Mammukoya, Oduvil Unnikrishnan, Philomina are all appropriately cast for their roles and do well. But the film ultimately belongs to Thilakan and Mohanlal who are both excellent in their respective roles as Achuthan Nair and Sethumadhavan respectively. Thilakan as Achuthan Nair brings out various shades to his character-he is a fearless duty bound cop at work, a committed family man and someone eagerly awaiting for his son to become a police inspector. He is comfortable in both the light hearted moments and the emotional moments. 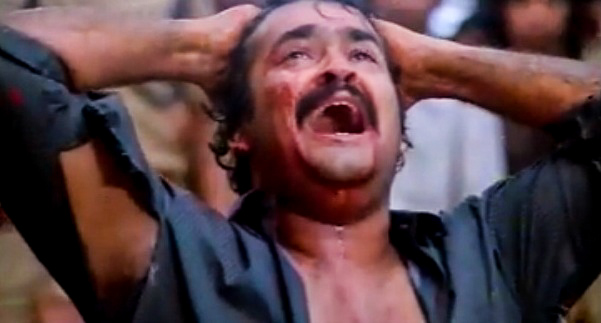 Watch for example the two fight scenes in the market, in the first one he keeps appealing earnestly for his son to stop the fight and watches helplessly as Keerikkadan Jose is brutally beaten up. In the climax fight scene he implores his son to drop the knife and this is done in a totally different manner. If Thilakan is amazing as Achuthan Nair, then Mohanlal is equally good (if not better) as Sethumadhavan. In the pre-climax when he asks Devi to get married and tells his uncle that he is not there to create any nuisance but to say goodbye to Devi or in the climax fight scene in the market, Mohanlal shows why he is just a class apart and he truly deserved the National Award (Special Jury Award) for his performance. But to ensure that the film is filled with wonderful moments one has to appreciate the writing involved and similarly the direction is commendable for ensuring that the writing is translated wonderfully on screen and for extracting such wonderful performances especially from Mohanlal and Thilakan. The combination of director Sibi Malayil and writer A.K.Lohithadas have left their stamp behind in grand fashion with Kireedam.

Kireedam is a special film which portrays the father-son relationship with such finesse, that you cannot stay unimpressed. It is also a reflection of our society in a way as it dwells upon the topic of every criminal is not born as one; instead there are some whom are a victim of certain unavoidable situations as well. Kireedam is also a rare Malayalam film which truly inspired the makers to come back again and deliver a sequel that does justice to the original film as seen in the form of Chenkol (1993). Here’s hoping that a film like this continues to be remembered in the future as well as I congratulate Sibi Malayil and the entire team of Kireedam for the special occasion of 25 glorious years. As for my name then I just have to conclude that with films like Kireedam, Chenkol and Mithunam, Mohanlal went on clearly make me feel proud of my own name and more than two decades later, I am still grinning when I think of those days :).