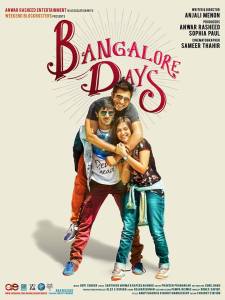 As the opening lines of Anjali Menon’s enchanting Bangalore Days tells you, Bangalore is the utopia every Malayali youngster wishes to escape to in search of his dreams, away from the sluggish pace of Kerala. Shyamaprasad did appear to sell a similar idea to us in a rather morbid and clichéd form in Rithu but Anjali Menon’s film is far more promising in its portrayal of the so-called Bangalore crowd, making the characters far more likeable and easy to relate to.

Family is a recurrence in Anjali’s works. In her own words – “Friends are the family we choose is a theme in the film – in this case they happen to be cousins”. With cousins, there is a blend of friendship and family bonding and the nostalgia of growing up together in Kerala but lo behold, as time flies, life takes a much serious turn because all of a sudden, you have grown up. Yes, I take it that the intensity of this bond diminishes rapidly later on in life unlike in movies, where such friendships are perpetually renewed.

Three youngsters with a world full of expectations arrive in the city – Krishnan PP urf Kuttan (Nivin Pauly) who lands a software job in the city, chirpy Divya (Nazriya Nazim) who bids goodbye to her MBA dreams to settle down with Das (Fahad Fazil) in Bangalore and the enigmatic wanderer Arjun (Dulquer Salman) who is a graffiti artist-cum-bike racer and wants to keep his past firmly behind him. Life takes its own diversions and they find their lives thrown out of gear in contrasting ways until these detours help them discover their destiny.

Love in the city comes in many forms – For the naive Kuttan, it is an ephemeral emotion through the seductive charm of an airhostess who breezes her way into his life high up in the skies only to bring him down crashing with a bleeding nose. That is a nice little piece of writing involved here when Meenakshi (Isha Talwar) appears in front of ‘Cute’ Kuttan just the way he wanted his dream girl to appear. He later on discovers, in his own words drunk in the intoxication of cola (the cola reference brought back college memories!), that Love is like Santa Claus – a chimera that people create desperately in hope.

For the carefree Arjun, it is in the mysterious form of a paraplegic radio jockey, Sarah, through whose voice he discovers the true joys of life. This relationship is captivating and chimes quietly in our hearts as they feel the pulse that brings light to their lives. At no moment, is there an attempt to underscore her handicap and when she ambulates in her wheelchair, clutching his hand, you know there is nothing more to say and that the man now knows what he wants in life (“I don’t want to walk behind you, I want to walk beside you”). It is wonderful to see a confident, young woman whose disability is not thrust on your face – think again and you realize he needs her emotional support more than she does. A positive differently-abled protagonist – when did we last see that?

In Divya’s case, the stars never give her an opportunity to fall in love before marriage – it is something that she has to discover for herself in a marriage with a man who confesses his inability to forget his past. She is the extrovert girl next door who is bursting with energy while Das is the dour, workaholic private individual whose space is extremely sacrosanct – whether it is a room that is always locked or even his computer password that he doesn’t share. There are rare glimpses when he drops his stoic guard like when her window painting brings in the early morning colours but it is a cold relationship and he does not allow her to enter his private space. In contrast to the freedom that she enjoys in the company of her cousins, there is an almost claustrophobic feeling that engulfs her, as she tries to overcome the loneliness created by the vacuum of Das’ emotional absence in her life. When he asks her cousins what was her age when she tried to pull a fast one on her mother, it brought a smile to my face – I liked the way the subtle admonishment is conveyed, without spelling it out. 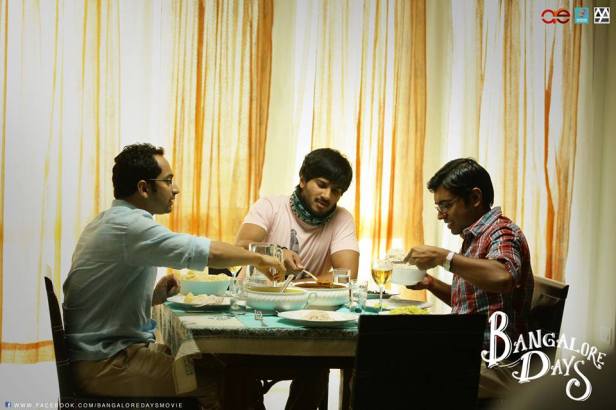 The title Bangalore Days is misleading – it does not invoke either the city or urban life or nostalgia associated with it; place the three folks anywhere else and you would still have the same impact. The city does not have a presence or a character of its own say unlike Trivandrum in Ee Adutha Kalathu or Kozhikode in Ustad Hotel but I suppose the landscape must be an attempt to break away from the traditional outlook of the past which Kerala appears to represent and what better than to locate the story in a city that represents a lot of Malayali aspirations. Unlike Anjali’s Manjadikuru and Ustad Hotel which looks at the youngsters as they trace their way back to their roots, Bangalore Days represents a progression away from their past. Considering that most movies create a beautiful nostalgic feel of Kerala, such an image exists here only in the computer images of one of the principal actors.

There is an attempt to crack stereotypes and maybe creating this movie in Bangalore gives the film maker the freedom not to be bound by the conservativeness of the state. I loved the way that Anjali allowed Kuttan’s parents to free themselves from bondage. His parents find their calling in different ways; this part is real hilarious and delivered in an absolute nonchalant way – a father who wants to breathe after suffocating for years in marriage and a mother who finally gets an opportunity to break free from the confines of a tiny village and enjoy the thrills of living in a city, with television, kitty parties, pranayama and all the vagaries that urban life can present. This segment could have fallen flat in its execution but is deftly adapted on screen; especially enjoyed the scene where Kuttan reads and re-reads his father’s letter – how a perspective can change lives! This could easily have wound up as a tragic set of events but thanks to Anjali’s script, this becomes refreshingly funny and manages to break the parental stereotype in Malayalam in more ways than I had ever imagined.

Essentially, every youth film revolves around discovering one’s true love or is a coming-of-age movie. To that extent, Bangalore Days does not deviate from this template. It is an out-and-out youth film but there are no candy floss moments that litter many juvenile romantic takes or that BINGO moment, when the hero wakes up to his responsibilities. Love is in the air but it seeps through gradually without being over-burdened by the exuberance of the youngsters. While the early 20s can be fun, as time grows and people go their own ways, the same thrill of being with friends and maybe even alone is replaced by that pensive feeling of being burdened by the need to be mature and responsible in life – as Divya and Arjun gradually realize with their life partners or Kuttan discovers in the transformation that his parents undergo.

With Nivin and Dulquer getting the best lines in the movie, there isn’t any doubt who the show stealers are. Nivin has the funniest moments in the film and reminded me of Saif in Dil Chahta Hai, with his impeccable sense of comic timing. You positively detest Fahadh in the first half but empathize with him later on – he is an enigma, always taking on the not-so-liked characters but still managing to stay with us – the man has a knack of selecting good roles! Nazriya, possibly in her last film, is the perfect fit for the vivacious Divya without overdoing it (you know the Kareena-types) but I was pretty impressed by Parvathi Menon’s mature performance. Despite this humongous star cast, I was pleasantly surprised by her arresting presence in the film (a future star alert!).

For all the breezy nature of the film, I felt that the writing was uneven and inconsistent at times. The seriousness that was vested in dealing with the relationships of Arjun and Divya are absent in Kuttan’s case – his illusionary balloon of love and relationships is burst and presented in a light-hearted way but there is no real culmination of his feelings. I felt that the writing appeared to juggle intermittently between a lighter side and serious side, a little unsure at times where to navigate to.

Das’ background story is significant and the way it is eventually dealt with it is nice but the past did have a cinematic feel. Maybe, slightly less dramatic and it would still have worked just as well. Sure, the cousins are close but I am still reluctant to accept the close proximity (especially physical) shown between them – that’s something that I have seen only in movies. Arjun has very little contact with his parents and no proper source of income but his appearances hardly reflect this – an almost Wake Up Sid moment that! At 173 minutes duration, this is a fairly long movie but truth be told, this isn’t much of a problem. You could snip a few minutes here and there and the songs, trim some of the racing moments, but that’s all.

For a movie that sets out to be fun and entertaining, there isn’t much more that you can ask for and looking at the audience trooping in large numbers at the theatres, Anjali Menon has definitely struck gold here…Do we have the Kerala equivalent of Dil Chahta Hai here finally?