In one of the earlier scenes in the film, Gochi – one of the street smart buddies of Arjun (Partho Gupte) looks excitedly at a girl wearing a pair of roller skates. Gochi and the other friends of Arjun who belong to lower strata of society,do not attend school and survive by doing odd jobs like working in a garage, doing embroidery, collecting trash etc. They are keen to help Arjun buy a pair of roller skates and help him learn skating which he desires to learn since long. Excitedly Gochi walks up to the girl (who presumably appears to belong to the higher strata of society) and asks her the price of the roller skates and she replies ‘It’s worth 30K ‘. The poor kid Gochi, who thanks to his lack of education hilariously assumes the price of the skates to be just worth 30rs and feels that purchasing a pair of skates for his friend isn’t a herculean task after all. The above mentioned scene may seem a bit far fetched and has a rather humorous tone. However in this one scene itself, director Amole Gupte makes us realize the economic disparity prevalent in our society.

Much like his earlier film Stanley ka Dabba, Gupte once again makes a film on children and their problems, a subject which is presumably close to Gupte’s heart. Arjun who makes a living by working at a tea stall gets fascinated by the sport of skating and impresses the skating coach Aniket (Saqib Saleem) who takes him under his tutelage with a determination to make him a champion.

The subject of the film is such that could make filmmakers excited at the prospect of inserting clichés and emotionally manipulative scenes at every possible instance. When Arjun’s friends realize that the roller skates are costly, instead of resorting to impossible ways for gathering money (as is the norm in our movies), they smartly make of pair of skates from scrap with help of a garage owner (Veteran actor Razaak Khan – good to see him in a role which does not cast him as a comic stereotype). One would also like to mention here a word about Saqib Saleem who gives a good performance once again as the skating coach. Although Saleem has done very few films till now, they have been largely good and he has been consistent in all of them. Hope he continues choosing his roles and films wisely. 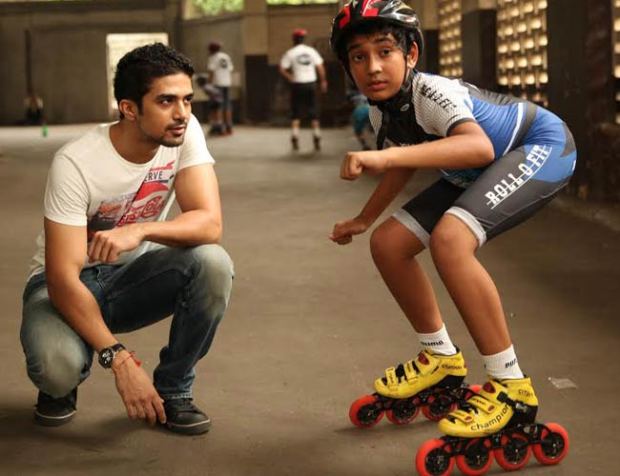 Similarly when Amole Gupte gives a peek into the life of Arjun and other kids, he thankfully decides to steer away from depicting their hardships in an emotionally manipulative way. Even the adults in the story are not depicted to be extremely benevolent or cold hearted. Like the tea stall owner where Arjun works, when Arjun breaks a glass of tea, instead of physically abusing Arjun he only reprimands him and asks him to be more careful in future. Even the kind hearted Garage owner who is appreciative of the kids and the intelligence and street smartness which they possess is a good example of the previously mentioned point. When Aniket decides to train Arjun in skating, there is no resentment amongst the other rich kids who are pupils of Aniket. Instead they encourage Arjun which comes as a welcome relief from the usual depiction of rich kids being snooty an arrogant. In a scene through Aniket’s character Gupte also makes a point about how people who are financially affluent indulge in armchair activism such as obeying traffic signals and are content about it. While there are much more important issues which deserve our attention, but we are perhaps blissfully unaware or ignorant about it. All the above mentioned scenes could have had an overload of clichés and emotional manipulation. However Amole Gupte steers clear of such things for a large part. Which is why it is rather disappointing to see Gupte resort to these very clichés as the film progresses towards its culmination. Suddenly Arjun starts getting guilt pangs for not having attended an important championship due to ill health and a la Milkha Singh he also has to overcome the skeletons of the past, his inner conflicts and emerge a winner in the end. Moreover, when one of the affluent students of Aniket, who is impressed with Arjun’s skills, tearfully offers his pair of roller skates to Arjun, it seems forced.

Some other subplots also stick out as sore thumbs which could have been dealt with skillfully or could have been totally avoided. Like the relationship between Aniket and his brother, the relationship between Aniket and Pragya- his probable love interest. Gupte also make references to Arjun’s past as he smilingly reminisces about his happy past life in the village, the time Arjun spent with his father (Makarand Deshpande who despite zilch dialogues has an endearing presence in the film) and ends up waking teary eyed. He also dwells upon the farmer suicide issue and unleashes it upon us when we least expect it. How I wish, one would have got to see more of the difference between Arjun’s past and his grim present situation rather than the flashback we have been subjected to. Stanley Ka Dabba clearly avoided clichés and took a more relatable way to look at the protagonist and in the process the culmination took one by complete surprise. However the overuse of sappy melodrama and clichés in Hawa Hawaii makes you feel rather disappointed and disconnected with the protagonist and his challenges as the film inches towards it’s culmination. Perhaps this is why one doesn’t root for Arjun to win the skating championship in the climax.

However in an industry that largely steers away from making films centered around children,  individuals like Amole Gupte indeed deserve to be appreciated for making films that focus on children and the various issues that they face.

Clearly the best thing about the film is the bunch of street smart friends of Arjun – Gochi (Ashfaque Khan), Bhura (Salman Khan), Abdul (Maaman Menon) and Murugan (Tirupati Krishnapelli) . A bunch of kids who live life the hard way yet are optimistic and have a steely resolution to live. A resolution to make a difference in each other’s lives and their friend Arjun’s life, when given such an opportunity. Their performances, their banter, the scenes which they have form some of the best portions of the film. Wish, the rest of the film had followed suit.