If there’s one important way in which the cinema is quite different from real life, it’s that in the movies, the possibility of catharsis is less remote, even, in some genres, a given. Whether it be a deathbed confession, a gunfight at dawn, a last-moment declaration of love everlasting at the airport, a sports victory or just a quiet moment of piece, the cinema is often willing to give us the closure that is so hard to find in our own lives. And it is this desire, this human need for redemption, for self-acceptance that uniquely characterizes Alexander Payne’s filmography. His movies revolve around “men trying to come to terms with their better natures”, as the late Roger Ebert once wrote about Payne, about people taking stock of their lives, trying and failing to match their lives to the image of it in their heads.

NEBRASKA marks a return to Payne’s native state, after two sojourns into Santa Ynez Valley wine country (SIDEWAYS) and Hawaii (THE DESCENDANTS), back to exploring the lives of middle and rural Americans and their unique human foibles. Payne’s camera is accepting, non-judgmental and unflinchingly observant of people at their most ludicrous and vulnerable, whether it be Matthew Broderick rigging a student election poll in vengeance against his student or George Clooney running pell-mell down a Kaua’i suburban street after hearing about his wife’s infidelity. The first step along the long road to redemption that comprises most of Payne’s films, is being the subject of a Payne film.  It humanizes these often-unlikable characters, justifies their behavior (usually in their own words) and tries to make us root for them, which we unfailingly do, always. It is in that priceless ability to make your audience fall in love with your characters, no matter how grotesque, by providing them with some redeeming human qualities, that Payne rises head and shoulders above his contemporaries working in the dramedy genre, like the once-promising Jason Reitman.

NEBRASKA tells the story of Woodrow T. Grant (Bruce Dern in a stunning performance) of Billings, Montana, who has just received one of those sweepstakes marketing letters that tell you that you’ve won a million dollars as long as you buy some encyclopedias and magazines and send back the letter. But Woody won’t trust the US mail with a million dollars, and since his car has gone bust and he wants to escape his nagging and domineering wife Kate (June Squibb, the life and soul of the movie), he decides to walk to Lincoln, Nebraska.  Of course his son David (SNL regular Will Forte, endearing as usual) brings him back, but seeing his father’s determination to claim his “winnings”, he decides to take a little road trip, just the two of them.  Along the way are various reunions, some bittersweet, some just bitter, in Woody’s old hometown, Hawthorne, where news of Woody’s fortune have attracted a gang of vultures, all claiming their rightful share. 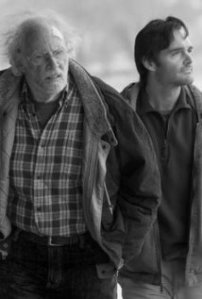 Using the brilliant Chekhovian plot device of the sweepstakes lottery ticket, Payne gives us a heartbreaking study of regret, of a man who has been screwed over and passed on by life more times than he can count, and who comes from a generation that never knew how to talk about what they were going through. He’s alienated from his family, most of who are alienated from themselves, and so he sticks to his one chance for glory with all the gusto he can muster. For that one moment under the shining sun. He gets something of that sort, a few seconds in a restaurant where people are applauding his good fortune and he looks surprised, incredulous, that after so long, he can still lay claim to the respect that he always wanted and never got. It doesn’t really matter that the fortune isn’t real and Woody isn’t getting a single buck. He’ll still have that moment of victory.

At another more obvious level, NEBRASKA is a father-son story. David is at the kind of crossroads in life where we most look to our parents for advice and inspiration, where we just don’t know what to do, where we look for answers in our own history and identity. David’s an electronics store salesman who’s just been left by his girlfriend of two years, and one of the reasons for coming on the road trip was because he wanted to get out of Billings for a while, too. Rethink his life, try and make the right decisions. He asks his dad over a beer about how Woody and Kate got married and how they decided to have kids. The answers he gets aren’t always helpful, but it’s good to know where you came from. The film is like Tim Burton’s BIG FISH in many ways, how David looks around the debris of his father’s life in Hawthorne (a town much like the one Bogdanovich explored in THE LAST PICTURE SHOW, where moral transgression and alcoholism are survival tools against the deadening ennui of everyday rural life), including a former girlfriend, to try and understand who this taciturn, boozy, exasperating man is. 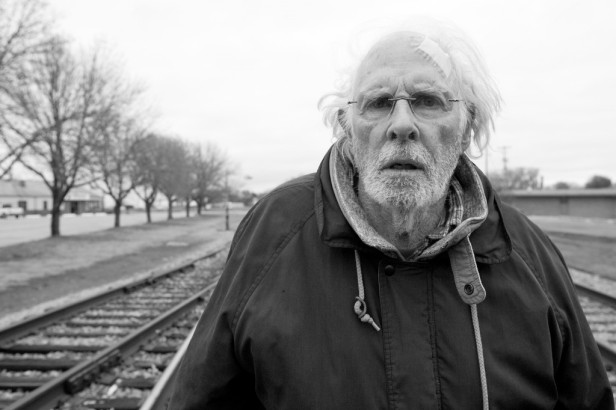 The film is shot in bleak black and white cinematography that mirrors an older time, which is in tune with its dominant theme of sigh-worthy nostalgia. The actors are uniformly terrific, led by its 77 year-old star who, against all odds, makes us feel protective of this alcoholic loser. June Squibb, who played Nicholson’s long-suffering wife in ABOUT SCHMIDT, adds some color to the palette in a scene where she effortless denigrates all their old Hawthorne acquaintances during a visit to the cemetery. Will Forte, as the sympathetic son, brings the kind of wide-eyed naivete that is perhaps just the kind of foil Woody’s fantastic claims needed. Bob “Better Call Saul” Odenkirk is also solid as David’s older, more successful and more realistic brother.

NEBRASKA is about a man, now old and broken, who takes stock of his life one last time to see if he measures up to all that he ever wanted to be. Did he win against life? No idea, but he does have a prize-winner hat to show for it. A brilliant, intensely personal movie from the modern master of dramedy. 8.5/10

6 thoughts on “Nebraska (2013) Movie Review: A Bittersweet Comedy of Regret”