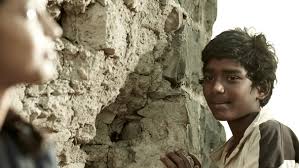 The upper-caste youth of India consider the reservations in the premier educational institutions( like the IITs and IIMs) as a punishment for something their ‘great-great-grandfathers’ did to somebody else’s ‘great-great-grandfathers’. Though there might be some substance in their argument that it compromises merit as there is indeed a big question mark on the effectiveness of reservations, this particular sentiment of the ignorant upper-caste youth of being at the receiving end of a punishment for a wrong-doing of only their forefathers is highly misplaced as exploitation of the Dalits in contemporary India is still quite rampant. Fandry (The Pig) is a well-crafted film which brings to fore, with solid impact, how our society is still terribly tilted against the marginalized sections which makes very difficult for them to break through their miserable conditions even if they strive hard for it.

In the film, we have a school going adolescent Jabya living in a small village called Akolner. He belongs to the ‘Kaikidi’ tribes who traditionally kill pigs and do other menial jobs for a living. They call the pigs ‘fandry‘ and hence the title.  He is a studious boy who aspires to escape from the clutches of the caste his family has been forced into for ages. He is also enamoured by Shalu, a girl in his class. She is everything he aspires for- upper caste, fair skinned and comparatively wealthy. Jabya is wise enough to understand the gulf between him and Shalu, but at the same time his adolescence makes him naïve enough to pine for her. He is also very determined to catch a mythical black sparrow which he thinks will help him impress Shalu. But the bird remains elusive making for a lovely metaphor.

Fandry is outstanding for a debut film. Nagraj Manjule’s control over the medium is very impressive. He paces his film gently, slowly but solidly building up for the powerful climax. Though marathi cinema these days tackles socially relevant subjects there is a tendency to make tear-jerkers or melodramas out of them. They tend to concentrate more on ‘what’ they are saying than ‘how’ they are saying it, resulting into what is known in the blogosphere as ‘NGO Filmmaking’. But Fandry isn’t that sort of a movie at all. The director wants us to empathise with the characters and not cry on their absolutely dismal life. But you just might feel in the beginning that Manjule is overstating things a bit.

The film is so authentic in the portrayal of the world of Jabya and his family that you seemed to be transported right in the centre of their universe. And the performance of each and every actor in the film goes a long way in maintaining that authenticity. Manjule’s decision to cast non-actors turns out to be a masterstroke.  Casting is a very under-appreciated part of filmmaking in India. The right casting helps to raise the film a few notches higher and this is exactly what has happened with the film. Every actor seems to be born to play the role. Somnath Avaghade as lead actor Jabya is mind-blowing to say the least. If there is anything called as getting under the skin of the character, it is this! The girl who plays Jabya’s love interest, Rajeshwari Kharat, fits the role quite perfectly too. She hardly has any dialogues and for a non-actor she is not at all conscious of the camera. One of the few professional actors in the film, Kishore Kadam has also put his everything into his part as Jabya’s father, named by the society as ‘Kachru’. Kishore Kadam is certainly one of the best actors in the marathi film industry and has never shied away from playing challenging roles. Chhaya Kadam, who I had last noticed in a very impressive short film called Vitthal, has also done a commendable job. The decision to shoot in sync-sound has certainly helped in conveying the emotions of the dialogues and thereby making the performances feel very real.

Fandry has quite a few striking scenes one amongst them is when a villager uploads a picture on facebook making fun of Jabya’s family’s activities. It paints a stark picture of India wherein technology has invaded but humanity is still absent. An even more impactful scene plays out during the village fair. Jabya, who is trying his best to impress Shalu with his dance skills, gets called out in the middle of his dance by his father and is made to do a menial job, right in front of the girl he is infatuated with, gut-wrenchingly crushing his hopes of getting her attention. The film also has a lot of subtext as it subtly keeps taking potshots at various aspects that plague our society like – the futility of our education system; the tendency in our country to idolize social reformers by building statues and painting their pictures on the wall, but not absorbing even a drop of what they stood for; the sexual innuendos that Dalit women are subjected to. Manjule has packed a lot in what is essentially a tale of adolescent love.

Another appreciable aspect of the film is that it doesn’t have the urban gaze which films like Peepli Live based in rural areas tend to have. This probably boils down to the fact that the director here is himself a  dalit and has gone on record saying that the film is inspired from his own life experiences. Nagraj also plays a somewhat eccentric character called Chankya effortlessly in the film.

Maharashtra has been the crucible of the social reformist movement blessed with the most influential leaders of the dalit cause like Ambedkar, Phule and Shahu Maharaj. Post-independence, it has had a vibrant dalit literature. So it may not be surprising that after Girish Kasarvalli’s Ghatashraddha, the most impressive film on the caste divide is from Maharashtra. Fandry in its stark depiction of a dalit family does remind you of Daya Pawar’s exceptional autobiography Balut. Interestingly, this film closely follows Anand Patwardhan’s seminal documentary film Jai Bhim Comrade and the marathi play Shivaji Underground in Bhimnagar Mohalla, both tackling the dalit issue masterfully. It makes one wonder whether a dalit awakening is round the corner in the arts of Maharashtra.

Fandry is mighty successful in what it sets to achieve, making for a smashing debut for Nagraj Manjule. As this review has pointed out, a scene from Shakepeare’s The Merchant of Venice very aptly describes the soul of the film :-

Special kudos should also be reserved for the producers Nilesh Navalakha( of Shala and Anumati fame) and Vivek Kajaria for supporting such a film and also to a big production house like Zee for picking it up for distribution. Here’s wishing the film turns out be a commercial success as well, encouraging more filmmakers to tackle such subjects.