Okay, I’ve heard the album a bit more than twice. That is, the whole album twice, and few songs thrice, and two songs more than that. And I’m still not sure how much of it I could bite, and how much of it I could digest. I may still need more time and more hearings to be really sure of how I feel. This is one album full of surprising variations. And like last Imtiaz Ali-AR Rahman album, this album has songs with multiple tunes. And unlike last Imtiaz Ali-AR Rahman album, is much less mainstream. All of them quirkier than they might seem like.

Somehow, Imtiaz Ali is never satisfied with a single tune. He likes a mix of them. And as many as possible, and a relatively dynamic orchestration. Maahi Ve is like on the lines of a song that is easily found on any of the Imtiaz Ali soundtracks. Like Tum Se Hi from Jab We Met, or Dooriyan from Love Aaj Kal and so on. That same easy going modern melody, modern music, soulful and simple lyrics, and images. More or less a simple song, depicting a road journey. It’s an Imtiaz Ali film. So we know there will be a journey. And thus there will be a song for that. Which I’ll play in my car when I am on road.

Wanna Mash Up more sounds like a track from Slumdog Millionaire. And then it sounds like Tu Mun Shudi from Raanjhana. And then it sounds like a track from Rangeela. And at the end of it, you know it sounds Rahman, and thus it’s nothing like any of those. Ultra quirky, ultra electronic, totally non-Indian and its placement is strange. In the album. Can’t say about the movie. It’s a DJ number, with a strange mood crossed with strange arrangements. With Rahman going bonkers over the synth and drum machine. Can be heard on screen, can be heard off screen. For the latter, not often I’d say.

Kahaan Hun Main, is a song depicting exhaustion, and being lost. After you’ve travelled a lot, and are not sure where you are headed. Lyrics go like this, “Kahaan hun main, raste kachche, baatein sachci, vaaste kahin pe, in sab mein kahaan hun main ab, maine bhi to aana tha, isi taraf, meri bhi to raahein hai, yahin kahin”. A jazzy tune, easy on ears, easy on mind. Easy to like, easy to forget.

Digital percussions start, a la Jai Ho and immediately shifts gears and goes a bhajan way. It features lyrics pointing towards worried protagonists looking for each other, helplessly. Tu Kuja is one of those songs which is multiple tunes following the same song. Haunting grandness plus electronic beats and synthesized tunes plus Sunidhi Chauhan singing a bhajan. Likeable and unusual.

Rahman goes vintage with Sooha Saha.  A song I’ve missed, and yearned, for a very long time. A lullaby, featuring *that* arrangement I have expected from Rahman. Wanted from Rahman. The unusual part are the vocals by Alia Bhatt. Those kid like vocals add unusual beauty to the song. Though her gasping could be muted. But, I’d say, I’ve gotten used to it. And oh, ghatam. And images of sparrows, rabbits, farms, and shooting stars. And flute solos. Lovely.

And then there was a medieval age Rahman. With strings of violins, and western classical orchestrations. And then Kabir lyrics. Heera is a song from that, traditional, widely scaled Rahman. Not totally new, not that old. Simple tune, long-lasting effect. And the most endearing parts of this song are the bells, the violin solo, and the string instrument. It is ukulele, I think. And please, hear it more than once. This is not a song that you’ll readily find up on your senses.

Dreamy vocals, dreamy tunes, no words, screechy, stretched sounds. Full mood, soothing digital beats, haunting vocals. Implosive Silence is one of the most unusual instrumental tracks since… 21st century. I can hear it for hours and hours and hours on loop. And it isn’t just a two minutes snip from the background score. It is a fully realized track lasting more than five minutes. Like a song, without words. It plays like players put their fingers on the keyboards. And played it easy, and relaxed. Gandhi simply went with the mood, and melodised by the tune. Maximum mood, maximum music. Maximum feelings, pure genius. 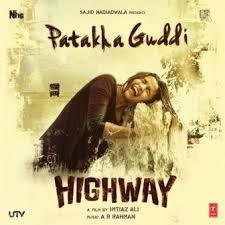 Patakha Guddi (female) is the Punjabi song you have heard, but not quite. Strangely, it reminds me of another Rahman masterpiece, Chinamma Chilkamma from Meenaxi. These are the lyrics of a joyous honey playing in the fields. The playful lyrics and playful music gel seamlessly. A high on energy track. And orchestrated with the same loving charm that most of the best songs we’ve come across in a Rahman discography. And oh, like the best of his tunes, there is, obviously, a solo. A flute solo. I think flute is the soul this time. Like guitar last time, flute is the muse this time around.

And then the Punjabi tune, goes guitar. And AR Rahman sings a Punjabi song. Patakha Guddi (male) version is actually rock, folk, melody, pop, hip hop version of the song. Orchestration changes every few seconds. And, because, he hasn’t done it before, it’s awe inspiring. Few times trying hard to sound authentic Punjabi, accidentally, he sounds all the more endearing. And he did so much in this one song, that I hear it twice every day to guess what to make of it. And the love says, you don’t have to make anything out of it. I hear it, and there is a guitar solo, and harmonium, and beats, and synthesizer all rolled together.

This is an album that you can’t gulp in one go. Huge variety to chew. And digest. I won’t say all of that is easily digestible. It takes a while to get going on this. This is traditional Rahman. One you can’t predict. You never know what’s next. And sometimes, the chronology of the album is so jarring, that you keep reeling the first time you hear all the tracks in order. After that you pick songs you like. I liked, Patakha Guddi (both the versions), Implosive silence, Sooha Saha more than the rest. I can’t hear Sooha Saha every time, same for the other tracks. I need mood, and I need to be looking for the songs I would want to hear. I guess that’s common with songs. We all hear them when we are looking for them. Highway is quite a strange album. Not all of it is novel. Not all of it is new. But its folk, and its vintage Rahman in places, and it seems heard in places, but “it never gets old”.

Professionally, a Guy in IT. Also, a Film-Maker, and a Blogger. Check links below, and on the left for more. View all posts by Salil Shankar