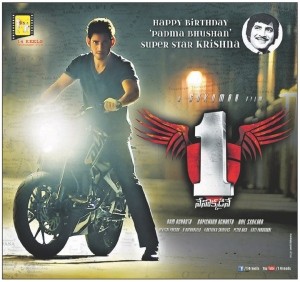 For the last two years, the Sankranthi festival has been very good for Mahesh Babu as his last two Sankranthi releases Businessman and Seethamma Vakitlo Sirimale Chettu did very well at the box office. Similarly Director Sukumar ‘s last film 100% Love starring Naga Chaitanya and Tamannaah did very well at the box office.  Due to this reason, Sukumar’s latest film 1 Nenokkadine starring Mahesh Babu has been eagerly anticipated and was expected to be the third straight successful Sankranthi film for Mahesh Babu.

Few weeks back, the poster of the film also had created quite a controversy after actress Samantha had tweeted that she found the poster of the film regressive which led to fans of Mahesh Babu on social media leading a hate campaign against Samantha and the fire intensified with director Sekhar Kammula going on to support her views on the same.

All this ensured that a sufficient amount of buzz was created for the film.  But does the film live up to the hype? Read on to find out more.

Mahesh Babu is a singer (or a rockstar as he is called in the film 🙂 ) who has faint memories of him being chased as a child by Kelly Dorjee and Pradeep Rawat . Thanks to a condition of memory loss, he believes that he is being chased by some people and he also believes his parents have been killed.  How he finds out the truth behind his condition and the mystery behind his parents death forms the crux of the film.

Mainstream films in India for a long time (especially those featuring a big star) have been following a common template – 1 terrific entry scene for the lead hero, some kick-ass punch dialogues, some songs for the star to display his dancing skills or the lack of it maybe, a mandatory love angle featuring a pretty actress, a mean and evil villain and some fight and action scenes to complete the circle. Tollywood films are no exception to this template, except the fact navel gazing is a very vital part of Telugu films.

In the last few years esp. in 2013, the quality of Telugu films has gone down drastically wherein every other film and actor is tirelessly sticking to the same template resulting in hardly any good Telugu films being made.

With 1 Nenokkadine  director Sukumar attempts a thriller which strives to be different from the usual Tollywood fare, in the process he has an arduous task at hand. While trying to make a taut thriller, he also has the task of keeping fans of Mahesh Babu happy by projecting him in his usual larger than life avatar. Sadly, while trying to strike a balance between the two, he fails big time. And this turns out to be the biggest undoing of the film. Moreover, the length of the film only adds to the monotony of the proceedings.(Apparently the film now has been trimmed by 20 minutes from its original run time of 170 minutes).

The film starts off rather well. For the first few minutes you are fairly hooked to the proceedings as Mahesh Babu fights people attacking him while he is also dealing with the condition of memory loss. But as the film progresses, it is not difficult to predict the course of events. In the due course, the film also introduces several characters, most of whom are annoying. 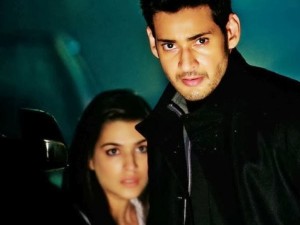 Several portions in the film seem unnecessary and could have been easily done away with, like that of the journalist (Kriti Sanon) following Mahesh Babu all the way to Goa and getting stranded on an island with him (which does not seem like Goa by any stretch of imagination).

Among the supporting cast members most of them seem to be present only to ham and get their paychecks. The most prominent being Sayaji Shinde and the doctor who diagnoses Mahesh Babu’s condition of memory loss. They ham in whatever little screen time they are allotted. The film has some other characters such as the annoying Posani Murali Krishna who plays a Sardar speaking Telugu and based in London 🙂 .  A fine actor like Nassar continues to be wasted in stereotypical roles that hardly do any justice to his talent. Kelly Dorjee and Pradeep Rawat yet again play stereotypical villainous roles esp Kelly Dorjee.

To be honest, the identity of the villain has been smartly handled and revealed in the penultimate scenes. But by the time the film reveals this important twist in the tale, the audience is quite exhausted.

Devi Sri Prasad scores a couple of hummable numbers but they hardly stay with you after the film has ended.  The film has been shot in various places such as London, Belfast and Goa and cinematographer R. Rathnavelu does capture some lovely visuals for the movie.  The action scenes are executed well and are perhaps the best thing about the film.

Mahesh Babu has a remarkable screen presence as always and tries to perform to best of his abilities. However he cannot do much to salvage a rather confused script. Kriti Sanon’s role is nothing different from the usual roles which Tollywood offers to its heroines – that of a boisterous and a bubbly girl which gets irritating after a while. She also dutifully performs the navel exhibition routine. However her rather unremarkable screen presence and non existing acting skills only adds to the monotony.

Ultimately as mentioned earlier 1 Nenokkadine ends up as a rather tedious fare despite having some good scenes and ideas, as Sukumar is confused between making a good thriller and keeping fans of Mahesh Babu happy. Had the makers not inserted a lot of unwanted scenes and subplots, this could have been a much better film.

23 thoughts on “1 Nenokkadine Movie Review: Sukumar’s ambitious attempt which works only in parts”