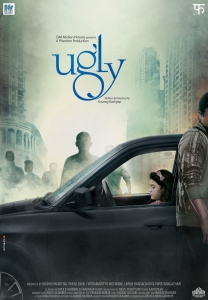 nurag Kashyap is one writer-director who never tires down. After last year’s Gangs of Wasseypur 1 & 2 he is now ready with his next film, Ugly (of course earlier this year he was also part of Bombay Talkies). Ugly  supposedly is a story about a divorced couple and their daughter who goes missing. This is followed by a series of blame game and the plot keeps oscillating between an emotional drama and a psychological thriller. Featuring Rahul Bhat, Ronit Roy, Girish Kulkarni, Tejaswini Kolhapure, Vineet Singh, Siddhant Kapoor etc, the film is produced by Phantom Films and DAR Motion Pictures.

The music is by G.V.Prakash Kumar and Brian McOmber while Nikos Andritsakis is the DOP and Aarti Bajaj is the editor. Ugly will be due for release shortly. Check out the trailer of the film now.