Ok if anyone is expecting that I’m going to be talking about my favorite Kamal Haasan films here then you’ve probably come to the wrong post. For sure I would write something on those lines someday but now is not the time for that. With Vishwaroopam finally looking to release in early 2013 I do have a few thoughts on my mind on what all I’d expect from him from here on. 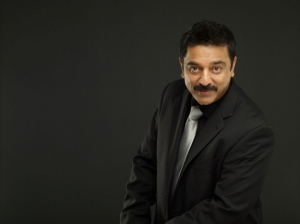 Of course I know that it would be difficult if not impossible to expect a Kamal Haasan- Singeetam film again considering the veteran’s filmmaker’s age. I also know that it’s not easy to make another Pushpak or a Michael Madana Kama Rajan. But I still believe that slice of life films with a gentle dose of comedy can still be made, either by Kamal himself or maybe by someone from the recent lot like A.Sarkunam ( Kalavani, Vaagai Sooda Vaa ) or maybe Venkat Prabhu.

Anyone and everyone following Tamil Cinema know that no one can understand Crazy Mohan’s writing as well as Kamal can and no other writer can bring out Kamal’s comic timing as well as Crazy Mohan can. So why not another mad caper from the combination which can be easily helmed by the trusted old hand, K.S.Ravikumar? Other names that come to my mind include Moulee and C.Sundar.

Time and again Kamal has made his intention clear of doing films on a lavish scale and mounting to match the standards of International biggies. The closest he came to fulfilling his wish was with Marudhanayagam which as we all know was stopped in the middle of the shooting due to lack of funds with one of the collaborators pulling out. Probably at that time (around 1999) the kind of budget that he was looking out for was beyond the reach of Indian filmmakers. But now with films like Endhiran/Robot pushing the envelope he can probably still try and revive the film again. Of course one problem that he could face in the whole exercise is the fact that the film apparently involves a lot of physical stress which at his age might be difficult to pull off. But then with Kamal Haasan there can always be surprises galore right? Even if it’s not a Marudhanayagam I still hope he does go on to make the kind of magnum opus that he has dreamed of for long.

Films with the new age filmmakers

I was extremely delighted when it was announced that Kamal and Mysskin would work on a project together. But alas the joy was short lived as the film was shelved for various reasons. But then barring a Chakri Toleti whom he introduced as filmmaker with Unnaipol Oruvan, of late he has only been working on his own films or with people like K.S.Ravikumar with whom he has a long standing professional relationship. Remember when Kamal and Gautham Menon worked together, the result was the wonderful Vettaiyaadu Vilayaadu which not only was a taut cop thriller but also managed to bring out the star in Kamal alive and kicking in a major way. Need any proof? Well then check out the opening scene of the film then. I am sure with a Mysskin, A.R.Murugadoss, Bala etc he can probably still get to work on some really wonderful subjects and give him a fresh perspective about the talent on display now.

A look at Telugu and Malayalam Cinema

Kamal has worked in films across many languages and among them Telugu and Malayalam have been areas of significant work. In fact during his early days when he was still trying to create a mark for himself in Tamil Cinema it was Malayalam Cinema which did justice to his potential. The result was there for us to see as he did a spate of films both commercial and critically acclaimed, even winning a couple of Filmfare Awards as Best Actor. Similarly in Telugu he kept doing films at regular intervals and was one of the few actors from other industries to actually gain the affection of the Telugu audience and be treated on par with the local actors. His partnership with I.V.Sasi in Malayalam and K.Vishwanath in Telugu to name a few people worked very well.

While I’m not sure if he can still get to work with these veteran filmmakers but why not work with some of the leading filmmakers from the 2 industries now? And considering that bilinguals and trilinguals have become common these days, the film can maybe have a Tamil version as well making the chances of getting it financed a lot more easily, considering the audience connect. I would personally look forward to Kamal working with talented filmmakers like a Ranjith, Blessy, Anwar Rasheed, S.S.Rajamouli etc. Let us see if something in this direction works out in the near future.

Mani Ratnam is already rated as one of Indian and Tamil Cinema’s all time best directors. The only occasion when Mani and Kamal worked together, the result was the magical Nayakan. Today 25 years after the release of the iconic film both of them are still going strong and while on and off there have been rumors of both these giants coming back to work together, nothing so far has happened. As someone who has the utmost respect for these 2 individuals, it would be nothing less than the announcement of the year for me if any project is announced with Kamal and Mani joining hands again.

And what can get bigger than even Kamal Haasan and Mani Ratnam working together? Well how about Kamal Haasan and Rajnikanth coming together for at least one film together where the film is centred around them and where they are not merely doing any cameo? In the beginning both these great actors had worked together on many films before parting ways to work on their own and establish themselves firmly. It’s a given fact that unfortunately it’s the problem of the fan clubs of these 2 actors which needs to be handled first before any such film materializes. One sure shot way of ensuring this is by ensuring that the film gives equal importance to both of them the right away. Needless to say only a director of Shankar’s (or maybe a K.S.Ravikumar) stature can pull of a dream project like this.

I would be more than keeping a look out for news of Kamal Haasan’s next project after Vishwaroopam ( though there are reports of a Hollywood film in the pipeline, nothing can be confirmed till it goes on the floors ). In case if you all feel there’s something else that he can or must do then feel free to use the comments section to discuss the same.

2 thoughts on “Kamal Haasan: What more can we expect from this disciple of Cinema?”