The Mahabharat has always been one of my favorite books. It is like an ocean for me, the more you know of it , the lesser you still know about it. And one of the most fascinating characters in the Mahabharata for me has been Karna. I guess maybe due to the fact, that Karna is a character who inhabits the grey area betweeen good and evil. He is brave, generous and a person who would give his life for his friend. Yet he collaborates in the Kaurava’s unfair strategy to kill Abhimanyu in the Chakravyuha. But the story of Karna, is that of a man who was let down by destiny. Abandoned by his real mother Kunti, as a child, he grew up under the care of a charioteer. At every stage he was let down by destiny, including his final moments, when he was killed totally defenceless. He refused to part company with Duryodhan even though he knew he was not on the right side, because of his friendship and gratitude.

Maniratnam adapted this legendary tale of the Karna-Duryodhan friendship, in a more modern setting, in his 1991 movie Thalapathi starring Rajnikanth and Mamooty. Karna here is Surya( Rajnikanth), who was abandoned by his real mother, when he was born out of wedlock, in a remote village. He is adopted by an old lady living in a slum in Chennai, and grows up there. Surya is a hot tempered youth who once beats up a local goon Ramana badly for molesting a girl there. Ramana later dies in hospital, and the problem is that he happens to be the right hand man for Deva( Mamooty), the local slum lord. Deva is furious and when Surya defies him, he has him arrested. However later Deva discovers Ramana’s crime, and releasing Surya from prison makes him his Thalapathi, or the chief.

Surya turns out to be Deva’s right hand man, as also his closest friend. In the mean while, Surya’s real mother Kalyani( Sri Vidya) is now married to a Government officer, and her son Arjun( Arvind Swamy), is in the Civil Services. Kalyani herself is a doctor and soon Arjun is posted to Chennai as collector. Deva is a kind of Robin Hood figure, whom the slum dwellers revere, as he takes care of their needs in a way neither the elected officials nor the government officers do. Surya is in love with a Brahmin girl, Shubalakshmi ( Shobana), who also loves him in return, but does not like his violent ways. She would prefer that Surya give it up, but he says that this is the only life he knows. Her father, an orthodox priest( Charu Hassan), however rejects Deva’s marriage proposal, saying he would rather see his daughter unmarried, than being married to a goon like Surya. Shubalaxmi is later married off to Arjun, while Surya marries Padma( Bhanupriya), Ramana’s widow. This is however more to protect her from others in the slum, rather than any feeling. In the meantime, a gang war breaks out between Deva and Kalivardhan( Amrish Puri), another gangster, and Deva’s sworn rival. The attacks come to the notice of Arjun, who vows to take action against Deva.

The first time i had seen Thalapathi, I somehow was not impressed much with the movie. I guess watching it in a Telugu dubbed version, with the dialogues appearing in a clipped format, was somewhat disconcerting. But this is one of those movies, that slowly grew on me, over repeated viewings, and I would rate this now as one of Mani’s great movies. The strong point in Thalapathi for me was the relati0nship between Deva and Surya, which was based on the Duryodhan-Karna friendship. The scenes between both of them are brilliantly shot.

The first scene where Deva and Surya confront each other on the bridge, in a rainy night, is brilliantly picturized. Deva’s imposing presence, Surya’s haughty could not care less demeanour, and the face off between them, is worth the price. Also the BGM of IR, just enhances the effect, as well as Santosh Sivan’s camera work, as he makes the rain swept night so realistic, you can actually feel it.

The best scene for me however is when Deva points to the wounds he received, while beaten up in the police station, and asks Surya to take revenge. Surya is hesistant, because he knows that Arjun is his step brother and is now torn between his closest friend and his own brother. And when he finally blurts out the truth, Deva is stunned to know. He immediately decides to surrender and in fact is much more proud of Surya than before.

For me this particular scene depicted the culmination of the friendship between Deva and Surya. Having grown up as an orphan, Surya, experiences friendship and affection from Deva. But when Deva asks him to kill his own brother, he is torn here, between the promise he had made to his mother, Kalyani, that he would not harm Arjun, and yet he had already pledged his loyalty to Deva, eternally. Its only when Deva questions his loyalty, that he is forced to reveal it. Deva in fact admires him more than ever, for the simple fact that he choose him, rather than his own brother, all these days. The bit where Deva holds Surya, and tells every one around “This is what a real friend is”, is really touching.

Another great scene in the movie is when Deva and Surya, are summoned by Arjun and asked to surrender. Both of them accuse of him not knowing the ground reality and blindly following the law. They tell him about how the slum dwellers are perpetually exploited by every one, the cops, the authorities, the political leaders and chide Arjun for not doing this. Mani again throwing up the question of the system failing out here. Arjun only believes that the law has to be followed, and he is somewhat unable to accept the reality.

The opening scene shot in Black &White, where Surya is abandoned as a child, by his teen mother, in a railway wagon, is again wonderfully picturized. We really dont get to see much of the girl’s face, just her anguished voice, and tying the scarf around the infant. The train moving along, the sounds of the Bhogi celebration in the background make it a really haunting scene.

Also maybe due to the character ’s name being Surya or the legend of Karna being the Sun God’s child, Mani uses the motif of sunrise and sunset throughout the movie at key points. The scene in which Shobana is introduced, as well as the Yamuna Aatriyile song. Or even better the particular scene where Surya promises to Kalyani’s husband that he would not tell her the truth, we see Mani framing it against the sun, and both Surya and Kalyani’s husband shown in a kind of silhoutte.

The way Mani interconnects the relationships not just between Surya and Deva, but with other characters also is excellent. Kalyani’s husband knowing about Surya’s parentage, when the latter blurts out to Arjun that he was abandoned as a child. Kalyani discovering the truth unknowingly from Surya’s wife Padma. And the rivalry between Deva and Kalivardhan. One of Mani’s strong points has been characterization, and the way he relates them, and that is shown in Thalapathy.

Like in Nayakan, Mani also depicts the gritty, claustrophobic nature of the slum in a realistic manner. For me one thing i like about Mani is the way he actually makes you feel the atmosphere. Santosh Sivan’s cinematography is brilliant, the way he frames the characters in a silhoutte manner against the sunlight, or in the opening scene shot in a stark B&W setting, or the scene when Surya and Deva face off with Arjun, as he keeps moving the camera around. But not sure where the river front scenes were shot, that was certainly not Chennai.

This was the last movie in which Illayaraja worked with Maniratnam, and the soundtrack is as usual excellent. Rakamma Kaiyya Thattu, is a real peppy and bouncy number, and i believe this came in a BBC Top 10 Music Poll, and of course was lifted lock, stock and barrel by Anand Milind for Tu, Tu, Tu Tu Tara in Bol Radha Bol. Sundari Kannal for me is one of the best songs in the album, Mani picturizing this in a kind of Japanese samurai setting. Yamunai Atrhiyile is more of a classic number, while Kaatukuyilu is a typical Pongal celebration song. 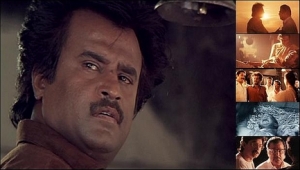 Casting Rajnikant in a role, which does not contain his trademark mannerisms, or super human feats, and that too at the height of his superstardom, is not a mean task. And Mani pulls it off brilliantly, as shorn of the mannerisms, we see one of Rajni’s finest performances. What we see in Thalapathy is not Rajni the superstar, but Rajni the actor, watch his expressions in that particular scene, where he is torn between his friendship for Deva, and the feeling for his own brother, brilliant. To people who are only familiar with Rajni’s antics that have been parodied, i request them to watch Thalapathy, to see the other side of him. And complementing Rajni scene for scene is Mamooty as Deva, the slum lord. In fact its the performances of these two actors that actually elevate the movie. Watch out for Mammooty’s expression, when he tells Arjun to go and do what he wants, a mixture of bemusement, arrogance and sarcasm. Making his debut Aravind Swamy does a fairly good job as Arjun, while Sri Vidya is excellent as usual. Amrish Puri is suitably nasty as the villian, and Bhanupriya, Shobana, Geeta( as Deva’s wife) and Nagesh( as Deva’s faithful employee) offer good support.

View all posts by Admin